India’s Show Against Qatar in FIFA World Cup 2022 Qualifiers Was the Answer to All Who Questioned Our Fitness, Says, Coach Igor Stimac 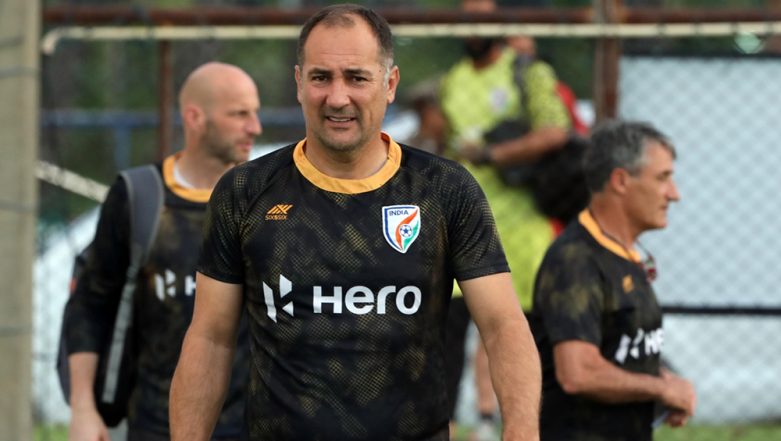 Kolkata, September 11: After registering a famous 0-0 draw against reigning Asian champions Qatar, India coach Igor Stimac has turned his attention to their home match against Bangladesh next month and urged the supporters to come in droves to back the team. Against all odds, India, ranked 103rd in the world, staved off 62nd-ranked Qatar for 90 minutes without the services of star forward and captain Sunil Chhetri, who was indisposed. After India's Brave Draw Against Qatar, Coach Igor Stimac Wants Indian Football Team to Remain Focussed in FIFA World Cup 2022 Qualifiers.

In goal and leading the side in Chhetri's absence, Gurpreet Singh Sandhu dished outperformance to remember as he affected innumerable saves to keep the hosts at bay. With their first point of Group E, India reignited their hopes of aiming for a top-two finish in the World Cup and Asian Cup qualification, which had suffered a jolt after a 1-2 defeat to Oman in Guwahati. Sunil Chhetri-Less Indian Football Team Script a Historic Draw Against Qatar in FIFA World Cup 2022 Asian Qualifiers; Netizens Laud Goalkeeper Gurpreet Singh Sandhu!

The side next take on Bangladesh at the colossal Vivekananda Yuba Bharati Krirangan on October 15. "Our performance against Qatar is an invitation to fans for our next home game. We have heard a lot about the passion for football in Kolkata. I want to see a full house at the YBK Stadium for our match against Bangladesh," Stimac told IANS.

"You need to be our 12th player. We deserve that and I expect them to come and help us get the three points," said the Croatian. Talking about Tuesday's game at the Jassim Bin Hamad Stadium in Doha, Stimac said the display put on by his team showed that the players' fitness levels were at optimum levels.

"Against Qatar, we proved to everyone who were talking about a lack of fitness among the players. Qatar are in a different league as compared to any team in Asia and my boys made sprints till the very last minute. They defended with such concentration throughout, which really proves their fitness capacity," the 52-year old coach said.

"As a coach, I am more than happy to get a point against the Asian Champions. All credit to my players and I'm really proud of them. I would also like to congratulate Qatar as the crowd really enjoyed the match and there was good football on display." After the game, the stats read 27-2 (shots) and 15-1 (corners) in favour of Qatar to underline the amount of defending India had to do.

In the second half, the men in blue also fashioned a few chances on the break, with Sahal Abdul Samad and Udanta Singh seeing their efforts go just past the frame of the goal. "Qatar had more chances than us. But we also had our own, and that make us more experienced. When we become a more experienced side, we will convert those opportunities," he added.