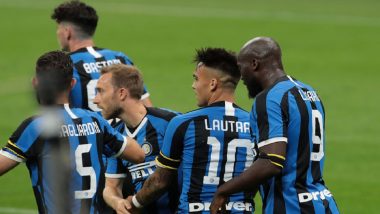 Rome, June 22: Inter Milan restarted their Serie A campaign by beating Sampdoria 2-1 at the San Siro, cutting their deficit to leaders Juventus to six points. Strikes from Romelu Lukaku and Lautaro Martinez put the Nerazzurri firmly in charge before half-time on Sunday. Sampdoria pulled one back after the break but it was not enough, reports Xinhua news agency.

Inter Milan entered Sunday's game trailing Juventus by nine points with one game in hand. Christian Eriksen found the net just seconds into the game, but the goal was ruled out as Antonio Candreva had been flagged offside in the build up. Real Sociedad 1–2 Real Madrid, La Liga 2019–20 Match Result: Zinedine Zidane Bothered by ‘Referee Talk’ As Los Blancos Go to Top of La Liga.

The hosts broke the deadlock in the 10th minute with a great team goal as Lukaku burst into the box after a give-and-go with Eriksen, and the Belgian striker curled the ball left-footed into the net. Inter Milan doubled their lead in the 32nd minute, after Lukaku's smart pass found Candreva, and the Italian international squared for an unmarked Lautaro to tap in.

(The above story first appeared on LatestLY on Jun 22, 2020 09:57 AM IST. For more news and updates on politics, world, sports, entertainment and lifestyle, log on to our website latestly.com).