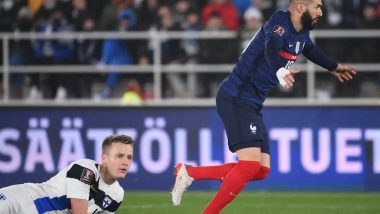 Benzema posted a couple of pictures of himself while scoring a goal. In the other picture, Benzema was seen celebrating his goal against Finland. As a part of the caption, he even hailed team France for the kind of a show they put up. "Good result to end the break well, let's go team," read the caption of the snaps. A few of his teammates also reacted to the snaps and also commented on the same.

The official account of France football also posted a tweet on social media and hailed the team for their qualification in the World Cup.

The likes of Belgium, France, Denmark, England, Germany Netherlands and Serbia have qualified for the World Cup. The likes of Cristiano Ronaldo's Portugal, Russia, Scotland Italy, Turkey are among the ones qualified for playoffs.

(The above story first appeared on LatestLY on Nov 17, 2021 10:38 AM IST. For more news and updates on politics, world, sports, entertainment and lifestyle, log on to our website latestly.com).