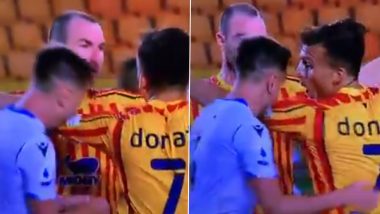 Lazio’s title challenge has gone off the boil since football’s restart from coronavirus enforced suspension as Simone Inzaghi’s men have lost two of their last five games. Their most recent defeat came against relegation-threatened Lecce on Tuesday as they lost further ground on leaders Juventus. And to add to that misery, Lazio defender Patric was sent off for biting an opponent. AC Milan 4–2 Juventus, Serie A 2019–20 Match Result: Rossoneri Score Three Goals in Five Minutes to Stun the Table-Toppers.

The right-back was given his marching orders by the referee in the 93rd minute of the game after he was spotted by VAR while biting on the arm of Lecce defender Giulio Donati. The incident occurred after second-placed Lazio received a free-kick as they looked to level the game and gain a point to keep pace with Juventus. Cristiano Ronaldo Catches Up on the Race for Golden Boot 2019-20.

In the video, Patric could be clearly seen taking a bit off Donati’s arm as the two tussled with each other during the late set-piece. After reviewing the footage, the Lazio full-back was shown a straight red card sent to the dressing by the referee.

Patric takes a bite out of Donati. Luis Suarez would be proud. #LecceLazio pic.twitter.com/cAZIiIVpil

The 27-year-old defender will surely miss Lazio’s next game against Sassuolo but it remains to be seen if he will be punished further for violent conduct by the Italian FA.

After this loss, Lazio’s title push has surely come to an end as they find themselves seven points behind leaders Juventus with seven games left in the season. However, the result was a crucial one for Lecce as they climbed out of the drop zone and will look to stay there to keep their status as Italy’s top-flight club.

(The above story first appeared on LatestLY on Jul 08, 2020 03:36 PM IST. For more news and updates on politics, world, sports, entertainment and lifestyle, log on to our website latestly.com).