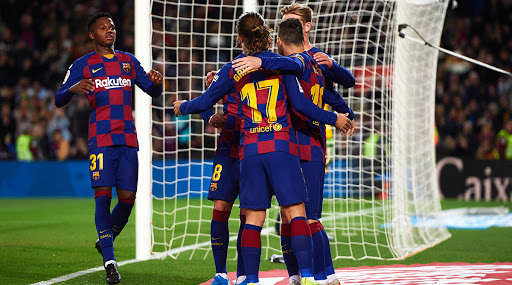 League leaders FC Barcelona (BAR) will be back in action when they travel to Leganes (LEG) for a La Liga Clash. LEG vs BAR match will take place at the Estadio Municipal de Butarque in Leganes. Barcelona are on the top of the league table while Leganes are struggling at the bottom. The Catalan side defeated Celta Vigo in their last match while ten-man Leganes were held to a draw by Real Sociedad. For fans of Dream11 fantasy game, here are some tips and team suggestions so you can build a strong team for the Leganes vs FC Barcelona clash in La Liga 2019-20. Lionel Messi Dribbles Past Six Uruguay Players During ARG vs URU International Friendly 2019, Netizens Left in Awe of Argentina Footballer's Mad Skills (Watch Video).

Leganes have made a horrible start to the 2019-20 season, managing just one victory in their 23 league games of the campaign. The poor run of results cost Mauricio Pellegrino his job and left Los Pepineros rock-bottom in La Liga, with 17th placed Real Betis seven points ahead. Barcelona have puy their troublesome start behind them and are at the top of the standings, although the fifth-placed Sociedad are two points behind them. Marc Navarro and Ruben Perez will be unavailable for Leganes as both the players are suffering from injuries. Leganes vs Barcelona, La Liga 2019 Free Live Streaming Online & Match Time in IST: How to Get Live Telecast on TV & Football Score Updates in India?

Leganes vs FC Barcelona, La Liga 2019-20, Dream11 Team Prediction: Goalkeeper – Marc Andre Ter Stegen (BAR) has been in a good form this season so he will be a good choice.

Leganes vs FC Barcelona, La Liga 2019-20, Dream11 Team Prediction: Defenders – Both teams have a poor defensive record so selecting three defenders will be beneficial. The players in your team should be Jordi Alba (BAR), Gerard Pique (BAR) and Roberto Rosales (LEG).

Leganes vs FC Barcelona, La Liga 2019-20, Dream11 Team Prediction: Midfielders – Ousmane Dembele (BAR) will be one of the main threat for Barcelona on the wings and can be selected as your vice-captain. The other midfielders in your team should be Oscar Arnaiz (LEG), Roque Mesa (LEG), Frenkie De Jong (BAR) and Sergio Busquests (BAR).

Leganes vs FC Barcelona, La Liga 2019-20, Dream11 Team Prediction: Forwards – Lionel Messi (BAR) has been in spectacular form since his return from injury and should be selected as your captain. The other forward in your team should be Martin Braithwaite (LEG).

Newly appointed Leganes boss Javier Aguirre has a host of problems to deal with before his first home game of the season. Leganes prevailed in the previous fixture last season as Barcelona squandered an early lead to lose 2-1 at the Butarque. The home side will be looking to replicate that result.