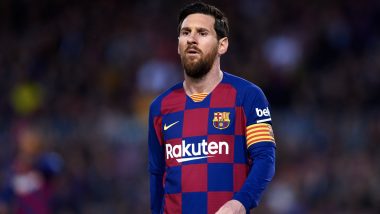 "What they said about Newell's Old Boys a few weeks ago is also false, thank God no one believed them," Messi said in an Instagram post.

He also distanced himself from a rumour that said he had paid the bail money to allow the release of Brazilian star Ronaldinho from a Paraguay jail. Angry Lionel Messi Calls Out False Reports Claiming His Transfer to Inter Milan and Putting Money for Ronaldinho's Bail.

Messi shared a tweet from a football news portal and singled out the Inter move and Ronaldinho bail money reports as 'Lie No. 1' and 'Lie No.2' on Instagram.

Ronaldinho was released from jail and has been placed under house arrest in Paraguay. Both Ronaldinho, 40, and his brother Roberto Assis have denied any wrongdoing.

The Brazilian football great and his brother, Roberto Assis, have been held at a prison in Asuncion since March 6 for using fake passports.

The pair was relocated to a hotel in the center of Asuncion after agreeing to pay $1.6 million in bail during a court hearing. Judges had rejected three previous bail requests by the brothers.

"I played with Cristiano and he's really amazing, but I'll go with Messi," Kaka said when asked who he would pick out of Messi or Ronaldo during an Instagram Live Q&A for FIFA's channel.

(The above story first appeared on LatestLY on Apr 10, 2020 03:40 PM IST. For more news and updates on politics, world, sports, entertainment and lifestyle, log on to our website latestly.com).