Lionel Messi Reportedly Training Alone in Paris After Testing Negative for COVID-19, Will Rejoin PSG Squad in Next Few Days

The 34-year old had tested positive for COVID-19 earlier and PSG would be happy to have him back after a full recovery as the club deals with a wave of COVID-19 infections. PSG take on Lyon in Ligue 1 on January 10. 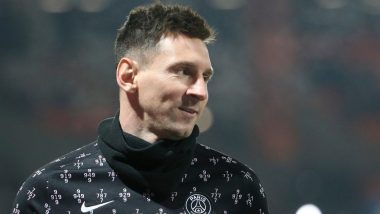 Lionel Messi is reportedly training alone in a bid to rejoin his PSG team after testing negative for COVID-19. The Argentine star contracted the virus during his Christmas holiday break in December and it would come as welcome news to his fans that he is reportedly back in training according to Diario Sport, with a target of making it to the matchday squad when PSG take on Lyon in Ligue 1 on January 10. PSG's squad has been hit a flurry of COVID-19 infections with Juan Bernat,  Danilo Pereira, Layvin Kurzawa, Sergio Rico among others testing positive for the virus. Lionel Messi and Three Other PSG Players Test Positive For COVID-19

The French giants have done well in Ligue 1 2021-22 so far, winning a total of 14 games as they are placed right at the top of the table with 46 points, 13 clear of second-placed Nice. At the moment, Messi looks set to be lifting the Ligue 1 title in his very first season with PSG but the competition looks to get more intense as the season proceeds.

PSG undoubtedly are the favourites to reclaim the Ligue 1 2021-22 title from Lille but they would be slightly more focused on the Champions League, where they have drawn Real Madrid in the round of 16. They had failed to clinch European glory two years ago when they lost the Champions League final to Bayern Munich but Mauricio Pochettino's squad, which is currently one of the best in Europe, does hold the potential to go all the way. Messi so far, has had a pretty poor Ligue 1 season, managing to score just once in 11 appearances. He has scored five times in the Champions League this season, though.

(The above story first appeared on LatestLY on Jan 07, 2022 12:20 PM IST. For more news and updates on politics, world, sports, entertainment and lifestyle, log on to our website latestly.com).