The Argentine superstar was not aided by luck at all as he found the woodwork twice with PSG eventually playing out a 2-2 draw against Troyes. Messi has managed to score just four goals this season. 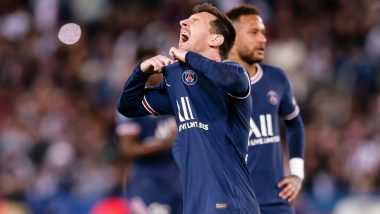 Lionel Messi's season just keeps getting from bad to worse as now, the Argentine forward has set for himself an unwanted record. Messi, who has not been able to recreate his old form for Barcelona, hit the woodwork twice in PSG's Ligue 1 game against Troyes a day ago. The French champions took a 2-0 lead but failed to keep it intact with Troyes mounting a fightback, levelling the score 2-2 at one point in time. Eventually, both sides shared points in what turned out to be another disappointing night for the newly crowned champions. Cristiano Ronaldo Holds 'Emergency Meeting' With Sir Alex Ferguson To Decide Manchester United Future

Messi, who has scored just four times in Ligue 1 this season, now has hit the woodwork a total of 10 times this season, more than any other player since the time these stats were counted. The seven-time Ballon d'Or winner has had a pretty forgettable season and rightfully, missed out on a spot on the nominee's list for the Ligue 1 player of the season. The Argentine would be eager on keeping this disappointing debut season behind him as quickly as possible so that he can regroup and come back stronger in the next season.

Despite conceding twice to eventually settle for one point, PSG coach Mauricio Pochettino was not disappointed with his team's efforts as Amazon Prime Video quoted him saying, "I think we had a good game. We made two mistakes, that's why we didn't win. We dominated the game, we had chances but those two mistakes cost us the three points."

PSG next take on Montpellier on May 15.

(The above story first appeared on LatestLY on May 09, 2022 06:10 PM IST. For more news and updates on politics, world, sports, entertainment and lifestyle, log on to our website latestly.com).