The Argentine record Ballon d'Or winner sent forth a beaming smile for his former teammate Pedri after he won the Kopa 2021 Trophy. Messi played with Pedri for one season before leaving Barcelona for Paris Saint-Germain. 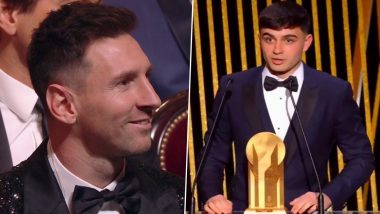 Messi smiling at Pedri after he gets Kopa award (Photo credit: Twitter)

Lionel Messi grabbed the spotlight along with others in a glittering ceremony in Paris at the Ballon d'Or 2021 on Tuesday, November 30. The Argentine great got his hands on the Ballon d'Or for a record seventh time, two more than his Cristiano Ronaldo. Not only did he show a lot of sportsmanship while applauding closest competitor Robert Lewandowski for two terrific seasons which saw him end the rankings at the second place, but he also smiled gleefully when Pedri was named Kopa 2021 trophy winner at the ceremony. For the record, Messi had played a season with young Pedri at Barcelona. Lionel Messi's Son Thiago’s Reaction to His Father Winning Ballon d’Or 2021 is Truly Unmissable, Adorable Video Goes Viral

Take a look at the video here:

The 19-year old Pedri has had a fantastic year where he won Euro 'Young Player of the Tournament', represented Spain in the Olympics and also won the Golden Boy 2021 award. He had played just one season with Lionel Messi at Barcelona and also thanked the Argentine for helping him get to where he is today. Pedri fended off competition from Borussia Dortmund's Jude Bellingham and Manchester United's Mason Greenwood to get the award. Toni Kroos & Iker Casillas Lash Out at Ballon d’Or After Lionel Messi Takes Away the Prized Possession for Seventh Time

Pedri has a memorable start to life at Barcelona joining them from Las Palmas last year and fans would expect that the young midfielder continues to impress in the remainder of this season. For someone who idolises Andres Iniesta and learns from Messi, one can be sure that he is surely on the right path to greatness!

(The above story first appeared on LatestLY on Nov 30, 2021 05:24 PM IST. For more news and updates on politics, world, sports, entertainment and lifestyle, log on to our website latestly.com).