Luis Suarez Allegedly Cheated In His Language Test, Uruguay Footballer Caught Up in Cheating Row Prior To Failed Juventus Transfer 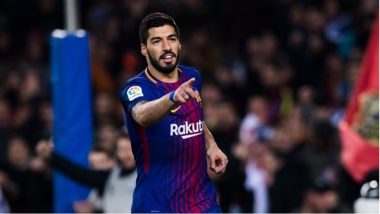 Luis Suarez has been found himself in the eye of the storm. If reports are to be believed, the Uruguay footballer cheated in the language test while he was in talks with Juventus for transfer.  Suarez had been linked to the Bianconeri ever since he was told that he is a misfit for Barcelona. The transfer might have not worked but the Uruguay footballer found himself in a soup. If reports are to be believed, Perugia has evidence that Suarez knew all the questions before his language test which is a mandate for Italian citizenship. The taped conversations between Maria Turco, a lawyer hired by Juventus and an official at University for Foreigners had the former negotiating to give good grades to Suarez. In the tapes, Turco was heard saying that they would send more non-EU players to the university for the tests but only if Suarez passed the test with flying colours. Luis Suarez Leaves Barcelona Training Facilities in Tears Ahead of Atletico Madrid Transfer (Watch Video).

Suarez passed the test with flying colours. However, it is said that the investigators have a recording of the examiners saying you “cannot spoil a salary of €10M per year” by not having a sufficient B1 level of proficiency in Italian. “Tell me what grade I give and that’s it.”  The test was tailor-made to suit the star footballer’s needs. The test was supposed to be taken on September 22 but was instead taken on September 17. A famous media house carried a quote from an official where he said that Luis Suarez cannot speak a word of Italian and uses infinitives. The official further said that if a journalist were to quiz him in Italian he would be lost.

According to another media house, there were three phone calls being made between the lawyers and the official ahead of the test. The Italian police officials are looking into the matter. Meanwhile, Luis Suarez is all set to join Atletico Madrid.

(The above story first appeared on LatestLY on Sep 24, 2020 10:11 AM IST. For more news and updates on politics, world, sports, entertainment and lifestyle, log on to our website latestly.com).