Manchester City have confirmed the transfer of Erling Haaland from Borussia Dortmund, the club said in a statement on Tuesday. 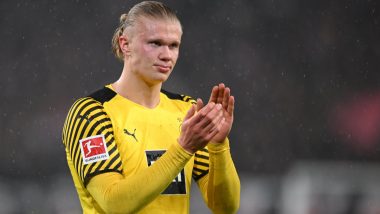 London, May 10: Manchester City have confirmed the transfer of Erling Haaland from Borussia Dortmund, the club said in a statement on Tuesday. "Manchester City can confirm that we have reached an agreement in principle with Borussia Dortmund for the transfer of striker Erling Haaland to the Club on 1 July 2022," the club said in a statement, Earlier, speaking ahead of City's crucial Premier League trip to Wolves in the Premier League, manager Pep Guardiola effectively confirmed the imminent signing of Haaland. Aston Villa 1-2 Liverpool, EPL 2021-22: Sadio Mane Inspires Comeback Win As Reds Keep Pressure On Man City (Watch Goal Video Highlights).

It is believed that City have triggered Haaland's release clause of EUR 60m, which works out at around EUR 51m. At the same time, Dortmund posted an official update on their own website, noting that the transfer will give them a 'positive effect' for the 2022/23 financial year. "Player Erling Haaland ("Player") is about to transfer from Borussia Dortmund GmbH & Co. KGaA ("BVB") to Manchester City Football Club Limited ("Manchester City"). All parties have agreed on the basics of this today. The contractual details still have to be coordinated and documented. Champions League New Format from 2024, Confirms UEFA.

"The implementation of the transfer is also subject to proper and timely processing in accordance with the provisions of the FIFA Transfer Matching System (FIFA TMS)," Dortmund said in a statement on Tuesday. "With the realisation of this transfer business, the management expects a positive effect on the key earnings figures for the 2022/2023 financial year in the order of around EUR 35.0 million -- 40.0 million," it added.

(The above story first appeared on LatestLY on May 11, 2022 11:23 AM IST. For more news and updates on politics, world, sports, entertainment and lifestyle, log on to our website latestly.com).