Manchester City are already in contact with the Frenchman, who recently played in the European Championships. It is understood that Pep Guardiola spoke with Antoine Griezmann over the phone about a potential switch to the Premier League in the summer, who could be available for cheap given Barcelona's need to sell. 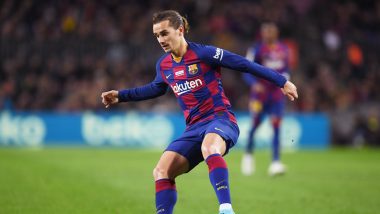 With Sergio Aguero leaving the club after a decade, Manchester City are in search of a new striker. Gabriel Jesus is the only recognised number 9 in the team and though Pep Guardiola’s men played without a focal point up-front for most of last season, they are looking to sort out the position with Harry Kane rumoured as the top priority. But with Spurs’ reluctance to sell and high asking price, Barcelona’s Antoine Griezmann has emerged as a possible alternative. Impossible for Barcelona to Match the Previous Salary of Messi, Says La Liga President Tebas.

According to Foot Mercato, Manchester City are already in contact with the Frenchman, who recently played at the European Championships. It is understood that Pep Guardiola spoke with Antoine Griezmann over the phone about a potential switch to the Premier League in the summer, and could be available for cheap given Barcelona's need to sell. Manchester City Can’t Afford To Sign a Striker This Summer, Says Pep Guardiola.

Barcelona signed Antoine Griezmann in 2019 with the Frenchman coming to the fore last season, playing a crucial role in the Copa del Rey title win. However, the Catalan club are open to selling the Frenchman in order to balance their books ahead of the new footballing season amid their major debt issues.

The Frenchman is one of the highest-paid players at Barcelona and with the club looking to reduce their wage structure, Antoine Griezmann could be offloaded with Manchester City being one of the few who can afford him. The 30-year-old’s departure could also play a huge role in the Catalan club renewing Lionel Messi as the Argentine's new deal has reportedly stalled due to La Liga’s FFP regulations.

‘For me, Griezmann is very important. He was an excellent recruit for Barça and he showed his quality. He is a very good player. But I insist, I do not know what decisions will be made in the end, because the most important thing is that Leo stays with us,’ said Barcelona boss Ronaldo Koeman when questioned about the Frenchman’s future.

(The above story first appeared on LatestLY on Jul 10, 2021 09:30 AM IST. For more news and updates on politics, world, sports, entertainment and lifestyle, log on to our website latestly.com).