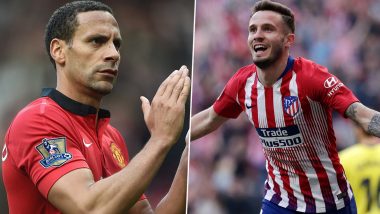 Saul Niguez has been a transfer target for Manchester United since the days of David Moyes and Louis Van Gaal. The Atletico Madrid midfielder teased his fans on social media after he posted a cryptic tweet regarding his future, stating he will announce a new club in few days. This sparked rumours that the 25-year-old might be on his way to Old Trafford and the buzz was intensified on Tuesday after United legend Rio Ferdinand’s reply. Manchester United Fans on Red Alert After Saul Niguez Posts Cryptic Tweet About His Future.

Saul Niguez recently took to Twitter to post a cryptic message regarding his future – which many believe is a publicity stunt – as the Spaniard wrote ‘New club, I'll announce it in three days.’ Since then Manchester United legend Rio Ferdinand has retweeted the post with an eye emoji. Cristiano Ronaldo Like Jadon Sancho Is Exactly What Manchester United Needs, Says Former Red Devil Wes Brown.

This has many Red Devils convinced that the former defender might have some information regarding the transfer. ‘Agent Rio’ said one United fan. ‘When rio tweets, it’s something he already know. Tell us mate,’ said another supporter.

Agent Rio, is that you?

What do you know then ferdi

When rio tweets, it’s something he already know. Tell us mate

While some users seemed pretty assured that the transfer will happen others were asking him not to get their hopes up and it is all just a ruse.

Don't Get My Hopes Up

Please Rio, don’t get my hopes up pic.twitter.com/Vksm3qNmF8

Saul Niguez has been one of the most important players for Diego Simeone during his tenure at the club. The 25-year-old is a crowd favourite in Madrid and has garnered attention from several clubs including Barcelona. This season, the playmaker has scored four goals, one of which was against Liverpool in the Champions League.

Back in April, during an interview with BBC Radio 5 Live, Ferdinand named the Spaniard as one of the players Manchester United should sign in the summer. ‘I would probably go for Sancho, Koulibaly and Saul Niguez from Atletico Madrid,’ said the former Red Devils and England defender.

(The above story first appeared on LatestLY on Jun 02, 2020 06:32 PM IST. For more news and updates on politics, world, sports, entertainment and lifestyle, log on to our website latestly.com).