Manchester United will be looking to reclaim the top spot in the league when they taken on Sheffield United at Old Trafford. The Red Devils are flying high at the moment with progress in the FA Cup at the expense of Liverpool and a near perfect form in the league. 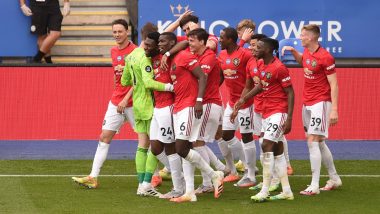 Marcus Rashford suffered a minor knee injury against Liveprool but the England ace is all set to start against the Blades. Victor Lindelof will be replaced by Eric Bailly in the team as Ole Gunnar Solskjaer looks to use him judiciously. Anthony Martial should replace Edinson Cavani as the striker after being dropped for the Liverpool tie. Paul Pogba and Bruno Fernandes are in great form for the hosts and the duo could once again have a say in the outcome of the contest. As the upcoming game gets lined up, let’s look at the streaming and other details.

Manchester United vs Sheffield United match in English Premier League 2020-21 will be played on January 28, 2020 (Thursday). The match will be played at Old Trafford and the game is scheduled to start at 1:45 am IST (Indian Standard Time).

Where to Get Live Telecast of Manchester United vs Sheffield United, Premier League 2020-21 Football Match?

How to Get Free Live Streaming of Manchester United vs Sheffield United, Premier League 2020-21 Football Match?

The game will also be available online for live streaming. As Star Network is the official broadcaster for Premier League in India, fans can watch the live streaming of Manchester United vs Sheffield United match on Disney+Hotstar. JIO and Airtel subscribers can also watch the match live on JIO TV and Airtel XStream.

Jack O’Connell, Jack Robinson, Sander Berge, Ben Osborn and Oliver McBurnie have been ruled out for Sheffield United with injuries. John Egan is suspended which further adds to the woes of the visitors. Oliver Burke is set to play a part in the attacking third while a five man midfield with Oliver Norwood as the defensive midfielder will try and stop United’s marauding midfield.

Manchester United have a brilliant record at home against Sheffield United and given the wide gulf in class between the two clubs, the hosts should secure an easy three points.

(The above story first appeared on LatestLY on Jan 27, 2021 02:24 PM IST. For more news and updates on politics, world, sports, entertainment and lifestyle, log on to our website latestly.com).