Mumbai City FC and Hyderabad FC have faced each other thrice in ISL history and the latter is yet to record their maiden win against the Islanders. Mumbai City have won two and drawn one of the three games these sides have played in the Indian Super League. City beat Hyderabad 2-0 in the reverse fixture earlier this season. 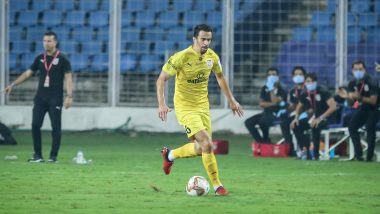 Mumbai City FC will eye a fifth consecutive win when they play Hyderabad FC in their next ISL 2020-21 match. Mumbai City FC are on a four-match winning run and are five points clear at the top of Indian Super League (ISL) season 7 points table. They also haven’t lost since the 0-1 defeat to NorthEast United FC in their first match of the season and are unbeaten in nine games. Hyderabad FC have scored four goals each in both of their previous two matches. Meanwhile, ahead of the Mumbai City FC vs Hyderabad FC ISL 2020-21 match, take a look at the head-to-head (H2H) records of both teams. MCFC vs HFC Dream11 Team Prediction in ISL 2020–21: Tips to Pick Goalkeeper, Defenders, Midfielders and Forwards for Mumbai City FC vs Hyderabad FC in Indian Super League 7 Football Match.

Hyderabad FC are fourth in the points table with 15 points from 10 matches. Mumbai City FC have played the same number of games and lead the table with 25 points. Hyderabad FC are missing forward Fran Sandaza, Nikhil Poojari and Souvik Chakrabarti due to injuries while Mumbai City FC are set to recall midfielder Ahmed Jahouh after the Moroccan completed his one-match suspension for a red card against Bengaluru FC. Take a look at the head-to-head records between both teams.

Vignesh Dakshinamurthy opened the scoring for Mumbai City FC in the 38th minute before Adam le Fondre doubled the lead in the second half as Mumbai cruised to a 2-0 victory. The loss was Hyderabad’s first defeat of the new ISL season. Mumbai extended their unbeaten record, with the win, to seven games.

Mohamed Larbi gave Mumbai City the lead from the penalty spot just two minutes before the break. But Marko Stankovic repaid the favour with an injury-time penalty goal to help Hyderabad FC come back and draw the game. Stankovic scored in the 94th minute of the match.

Modou Sougou put Mumbai City FC ahead as early as the sixth minute and then doubled the lead deep in the second half to seal a victory. Bobo (Deyvison Rogerio da Silva) scored a consolation goal for Hyderabad FC in the 81st minute. His goal came three minutes after Sougou had put Mumbai City 2-0 up. But despite Bobo’s late strike, Mumbai held on for the nervous final 10 minutes to see-off the win.

(The above story first appeared on LatestLY on Jan 16, 2021 03:50 PM IST. For more news and updates on politics, world, sports, entertainment and lifestyle, log on to our website latestly.com).