Mohamed Salah Back to Liverpool Training Session Ahead of their Match Against Everton, Fans Heave a Sigh of Relief (Watch Videos & See Pics) 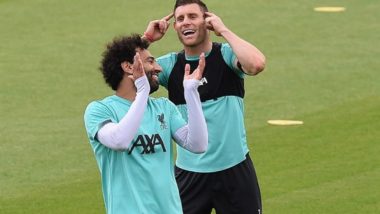 For a few days now, the fans were quite concerned about Mohamed Salah's absence during the practice session. The Egyptian King had missed out on a friendly match and a few days of training due to an injury. However, the fans now heave a sigh of relief as the Egyptian was pictured in the session and participated with the rest of the squad. The pictures and video of Salah in the practice session left them smiling from ear-to-ear. The Reds will be hosted by Everton on Sunday. Mohamed Salah Flaunts His Well-Chiselled Body During Liverpool Practice Session (See Pics).

Ahead of the game, even Liverpool manager Jurgen Klopp insisted that no player will be missing out on the upcoming tie. Which means we will soon see Salah in action on Sunday against Everton. Mo Salah, who celebrated his birthday a few days ago was all smiles as he was captured by the lensmen at Melwood. Check out the pictures and video below:

No doubt that Salah looks more than 100 fit

Go behind-the-scenes with Inside Training at Melwood, as the Reds prepare for Sunday's clash 👊

Earlier during the week when Klopp was asked about the fitness of Andy Robertson, Mohamed Salah and Alisson Becker, he said, "They all look fine." Talking about the match, it will begin at 11.30 PM IST. Stay tuned for more updates.

(The above story first appeared on LatestLY on Jun 20, 2020 08:13 PM IST. For more news and updates on politics, world, sports, entertainment and lifestyle, log on to our website latestly.com).