Morocco Squad for 2018 FIFA World Cup in Russia: Lineup, Team Details, Road to Qualification & Players to Watch Out for in Football WC

Morocco is placed in Group B along with Spain, Portugal and Iran. They will open their FIFA World Cup 2018 account against Iran on June 15 at Saint Petersburg Stadium, Saint Petersburg. 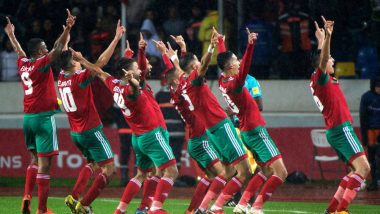 Herve Renard and his Atlas Lions aka Morocco football team have performed exceeding expectations in the run-up to the FIFA World Cup 2018 and the coach is convinced he has the firepower to be the giant killers in Russia. FIFA were so highly impressed by this African team’s defensive ability in the qualifiers that included Morocco in its list of ‘Defensive heroes hoping for Russian repeat.’ Morocco conceded just one goal in eight qualifying matches played which means playing 720 minutes of football with a single goal against it - an astonishing feat. FIFA World Cup 2018 Schedule in IST for PDF Download: Fixtures, Groups, Time Table with Match Timings & Venue Details of Football WC in Russia.

Medhi Benatia and Nabil Dirar are the two most important players in Moroccan defense and have comparatively more experienced in a team with not much international exposure. They were at the peak of their games during the qualifiers and were impenetrable. Wolverhampton Wanderers' Romain Saïss is another player who is expected to be in the starting eleven in Russia. Munir Mohamedi, their first-choice keeper, is one of the best young goalkeepers of Africa and all eyes would be on him in Russia.

Vice-Captain Mark Boussoufa will be the holding midfielder and will have the support of Feyenoord’s star attraction Karim El Ahmadi in the center of the park. They also have two potent wingers in Sofyyan Amrabat and Zakaria Labyad who play in the Dutch league, and it will be a good learning curve for them playing at the highest level. Khalid Boutaib has been picked for the lone striker role by Herve Renard for quite some time now and should continue in Russia.

Morocco was placed in Group C of the CAF World Cup qualifiers and topped the group with 12 points. They won three out their six games and did not lose a single match. Khalid Boutaib with 4 goals was the leading scorer for Morocco in the campaign, but it was their defense which made more headlines which was the best amongst the 32 nations that made it to the competition in Russia.

Mehdi Benatia: The former Bayern Munich and current Juventus star has won a string of trophies at the club level and has established himself as one of the best defenders of the game today. He is also the skipper of the team and leads a bunch of players with fairly less exposure of big stage and thus can calm their nerves.

Khalid Boutaib: Although he is 31 and has not played for big clubs, he turns up as a completely new man when playing for the national team. He was their leading scorer in the qualifiers, and we can expect quality upfront with Khalid Boutaib.

Morocco finished behind Ivory Coast in Group C of the CAF 2014 World Cup qualifiers and hence did not make it to the event in Brazil.

Morocco is placed in Group B along with Spain, Portugal and Iran. They will open their FIFA World Cup 2018 account against Iran on June 15 at Saint Petersburg Stadium, Saint Petersburg. It will be followed by remaining two group-stage matches against Portugal on June 20 at Luzhniki Stadium, Moscow and vs. Spain on June 25 at Kaliningrad Stadium, Kaliningrad.

(The above story first appeared on LatestLY on May 23, 2018 02:59 PM IST. For more news and updates on politics, world, sports, entertainment and lifestyle, log on to our website latestly.com).