NorthEast United FC finished ninth in the league last season after winning only twice in 18 matches. They drew eight and lost eight as another disappointing season drew to an end with coach Robert Jarni getting sacked midway through the season. But the clubs have started fresh this season with 19 new additions and a new coach at the helm. 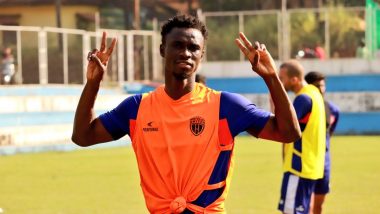 NorthEast United will hope for a fresh start to their otherwise dispiriting history in the Indian Super League. NorthEast United FC begin their ISL 2020-21 season against Mumbai City FC on November 21 (Saturday). In six seasons of the ISL, NorthEast United have made it to the knockouts only once and have finished with the wooden spoon twice. Change in coach and also major overhauls in the squad at the end of every season haven’t helped their cause and this season is no different for the Highlanders with the club selling 15 players and signing 19 more in addition to a young Spanish coach in Gerard Nus. ISL 2020-21 Full Schedule For Free PDF Download Online: Time Table With Date & Match Time In IST, Venue Details, Fixtures of Indian Super League 7.

NorthEast United FC finished ninth in the league last season after winning only twice in 18 matches. They drew eight and lost eight as another disappointing season drew to an end with coach Robert Jarni getting sacked midway through the season and Khalid Jamil taking over as a caretaker coach. Federico Gallego was their only success story last season and the club have added some more big names with Idrissa Sylla being the player to watch out for. Twitter Teams Up with ISL, Launches League and Club-Specific Emojis Ahead of 2020-21 Season.

The Highlanders, apart from their foreign recruits, have also made a number of key domestic signings with Ashutosh Mehta, a two-time I-League winner, a crucial addition to their backline. NorthEast United nearly made the final in 2018-19 before injuries and an away defeat to eventual champions Bengaluru FC ousted them from the semi-finals. They will hope to reach the same stage this season and from there make it an adventure towards the unchartered territory.

Idrissa Sylla, Dylan Fox, Kwesi Appiah, Ashutosh Mehta, Lalkhawpuimmawia and Suhair PV will be some of the key players for the Highlanders and crucial to their hopes for a good season in ISL 2020-21.

NorthEast United FC have played 98 matches in Indian Super League (ISL) history and won 27 while also losing 42 matches, which is the highest among all clubs. They have drawn 29 matches. The Highlanders have managed to score just 93 goals in six seasons and conceded 127.

Bartholomew Ogbeche, who currently plays for Mumbai City FC, is the leading goalscorer for NorthEast United FC with 12 goals to his name in just 18 matches while Reagan Singh, who joined Chennaiyin FC, is their most capped player with 68 appearances.

(The above story first appeared on LatestLY on Nov 19, 2020 04:37 PM IST. For more news and updates on politics, world, sports, entertainment and lifestyle, log on to our website latestly.com).