The duo got involved in a heated exchange while blaming each other for their mistakes in PSG's 3-1 defeat to Real Madrid in the Champions League. Karim Benzema struck a sensational hat-trick as Real Madrid advanced to the UEFA Champions League 2021-22 quarterfinals with a comeback win. 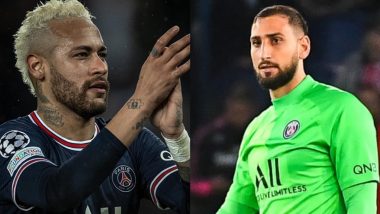 As if the defeat to Real Madrid was not enough, Neymar and Gianluigi Donnarumma were reportedly close to having a physical altercation in the dressing room and had to be separated by teammates. Real Madrid pulled off a sensational comeback, riding on Karim Benzema's second-half hattrick to dump PSG out of the Champions League and help his side move into the last eight. Lionel Messi Incensed at Marco Verratti for Not Passing to Him During PSG’s Defeat to Real Madrid in UEFA Champions League (Watch Video)

PSG had held a slender 1-0 advantage over their opponents ahead of the second leg and were largely the better side among the two in the first-half at Santiago Bernabeu. But Benzema's brilliance ensured Real Madrid's progression into the quarterfinals.

According to a report from Marca, the duo had to be separated by teammates as they came close to exchanging blows. It began off as a verbal confrontation when Neymar criticising Donnarruma for his goalkeeping blunder which to Real Madrid's first goal of the tie. The Italian goalie in turn hit out at Neymar blaming him for losing the ball to Luka Modric, which helped Benzema score his and Real Madrid's second on the night.

That was not the end of displaying frustration on part of PSG's camp. It was also reported that club president Nasser Al-Khelaifi and director Leonardo broke a piece of equipment after storming into the referee's room.

(The above story first appeared on LatestLY on Mar 10, 2022 09:18 PM IST. For more news and updates on politics, world, sports, entertainment and lifestyle, log on to our website latestly.com).