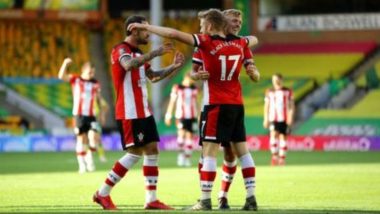 London, June 20: Southampton pushed Norwich closer to a return to the Championship after second-half goals from Danny Ings, Stuart Armstrong and Nathan Redmond earned a 3-0 win at Carrow Road.

Victory for the Saints lifts them 10 points clear of the Premier League relegation zone, but Norwich remain seven points adrift of safety at the bottom of the table.

After a minute's silence to remember the victims of coronavirus, every player took a knee prior to kick-off in support of the Black Lives Matter movement.

Chances were hard to come by before half-time as both sides struggled to adapt to the strange new surroundings of playing in an empty stadium.

Southampton got to grips with the conditions in the second period, though, to ease any lasting fears they could be dragged into a relegation battle.

Ings continued his fine season by curling his 19th goal of the season into the far corner.

Armstrong then took advantage of some weak Norwich defending to find space on the edge of the box to slot a low shot past Tim Krul.

And Redmond rounded off the scoring against his former club 11 minutes from time as the hosts were caught on the counter-attack.

(The above story first appeared on LatestLY on Jun 20, 2020 10:00 AM IST. For more news and updates on politics, world, sports, entertainment and lifestyle, log on to our website latestly.com).