A seventh league defeat of the campaign for Pep Guardiola's men means Liverpool are now just a maximum of two wins away from claiming a first league title in 30 years. Guardiola insisted his side had played well, but midfielder Bernardo Silva described the performance and result as unacceptable. 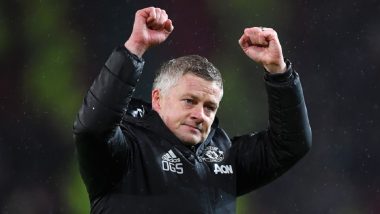 Manchester, March 9: Ole Gunnar Solskjaer believes the bond between Manchester United players and fans is returning after completing a first Premier League derby double over Manchester City for 10 years at Old Trafford on Sunday. Anthony Martial and Scott McTominay took advantage of errors from City goalkeeper Ederson to keep United hot on the heels of Chelsea for a top-four finish, just three points behind the Blues. United have lived in City's shadow in recent years, but have beaten their city rivals three times this season and are now unbeaten in 10 games in all competitions.

"The desire, attitude, commitment, the connection between fans and players," said Solskjaer on what had pleased him most. "What a day they've had today. "It's a derby. The fans love it, the players love it. You can say it's only three points, but to beat a team like Manchester City with the problems we've had is fantastic." United move up to fifth in the table, which could be good enough to qualify for the Champions League next season if City's appeal against a ban from European football for the next two years is not successful at the Court of Arbitration for Sport. Manchester City Fans Mock Ole Gunnar Solskjaer After Their Team Thrash Man United 3-1 in Carabao Cup Semis, Angry Netizens Too Slam Red Devils Manager!

And on this display, City seem to already be concentrating on completing a treble of cup competitions this season. A seventh league defeat of the campaign for Pep Guardiola's men means Liverpool are now just a maximum of two wins away from claiming a first league title in 30 years. Guardiola insisted his side had played well, but midfielder Bernardo Silva described the performance and result as unacceptable.

"Not a good performance and not acceptable from us. A team like ours cannot lose this many games in the Premier League as we have lost this season," said Silva. "The reality is that the pressure is not on the Premier League. We know our position is not changing a lot because we won't get to the title. I think we will be second to qualify for the Champions League, but it's a derby. It's important for our fans and it's not acceptable to lose 2-0."

City dominated possession early on, but badly missed the presence of the injured Kevin De Bruyne. The visitors' defensive deficiencies that have allowed Liverpool to streak 25 points clear were also obvious as Daniel James and Martial fired too close to Ederson with big chances on the counter-attack.

But it was an uncharacteristic error from the Brazilian that gifted United the lead. Bruno Fernandes was the creator with a scooped free-kick to pick out Martial and his shot squeezed under Ederson's right hand at the near post. Fred was then controversially booked for diving when he appeared to have been taken down inside the area by Nicolas Otamendi.

United fans were frustrated VAR did not intervene on that occasion and when it did early in the second half, City were nearly the beneficiaries. Sergio Aguero was flagged offside long before he fired past David de Gea, but the Argentine was only fractionally off when the move was reviewed.

Moments later Ederson escaped gifting another goal as a routine backpass rolled under his foot and the former Benfica stopper needed to produce a last-ditch tackle on Martial to deny United breathing space. However, where United may have buckled earlier in the season, Solskjaer's men held firm as De Gea denied Phil Foden and Gabriel Jesus.

McTominay then sealed the three points deep into stoppage time when he strode onto a wayward throw by Ederson to steer the ball into an unguarded net. "It's part of the game. He will recover and is an exceptional goalkeeper," said Guardiola of an error-strewn afternoon for Ederson.

(The above story first appeared on LatestLY on Mar 09, 2020 10:34 AM IST. For more news and updates on politics, world, sports, entertainment and lifestyle, log on to our website latestly.com).