Brazil have been absolutely unstoppable in the qualifiers so far, winning all five games that they have played. Their last victory came against Ecuador last week. Paraguay too, haven't lost a match so far. 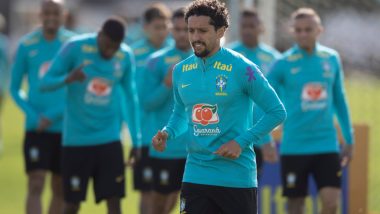 An unbeaten Brazil side would be aiming to continue their domination in ongoing CONMEBOL 2022 World Cup qualifiers when they face Paraguay at the Estadio Defensores del Chaco on Wednesday, June 9. Brazil have been absolutely unstoppable in the qualifiers so far, winning all five games that they have played. Their last victory came against Ecuador last week, whom they defeated 0-2 to guarantee a trip to Qatar next year. Paraguay too haven't lost a match so far. Currently placed fourth in the table, they managed to hold Uruguay to a goalless draw in their last match. They wouldn't mind a similar outcome against heavyweights like Brazil. Neymar Jr Reacts After Leading Brazil to a 2-0 Win Against Ecuador in 2022 World Cup Qualifier CONMEBOL Match

In terms of head-to-head dominance, Brazil won 49 out of the 81 matches played so far and lost on 13 instances. The last time these two sides squared off was in the quarter-finals of the Copa America last year, in which the Selecao won 4-3 on penalties.

When Is Paraguay vs Brazil Match Scheduled to Take Place? Date, Time and Venue of CONMEBOL 2022 World Cup Qualifier?

The match between Paraguay vs Brazil would be played at the Estadio Defensores del Chaco at 6:00 AM IST (Indian Standard Time)

Unfortunately, Paraguay vs Brazil match will not be live telecast in India as there are no official broadcasters available for the 2022 FIFA World Cup qualifiers in India. Fans will therefore not be able to catch the live-action of the CONMEBOL match on their television sets.

(The above story first appeared on LatestLY on Jun 08, 2021 07:27 PM IST. For more news and updates on politics, world, sports, entertainment and lifestyle, log on to our website latestly.com).