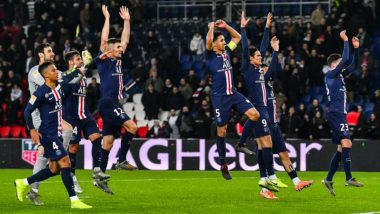 Paris Saint-Germain will face Saint-Etienne in the 2020 Coupe de France final at the Stade de France on Friday night. Both teams have been out of action since the second week of March but PSG have played two friendly games to prepare for the French Cup final and be in shape. PSG are the most successful team of the competition with 12 title wins and have lifted four of the last five trophies. They were beaten on penalty shootouts in last year’s final by Rennes and St-Etienne will hope to pull off a similar result against the heavyweights. Meanwhile, fans searching for the live telecast, online Live Streaming, match timings in IST and live scores, should scroll below for all details.

PSG thrashed Le Havre 9-0 in their first friendly and followed it with a 4-0 victory over Celtic. Thomas Tuchel’s men had seven different goalscorers across both those matches with Neymar and Kylian Mbappe combining for five of the 13 goals scored. Neymar alone scored three of those. For Etienne, this will be the first match. They overcame Monaco and Rennes in the round of 16 and semi-finals to progress into the final. French Football to Return on July 24 and 31 with Coupe De France and Coupe de la Ligue Finals.

Paris Saint-Germain vs Saint-Etienne final match in Coupe de France 2020 will take place on July 25 (Friday midnight). The match will be played at the Stade de France and it has a scheduled start time of 12:40 am IST (Indian Standard Time).

Where to Watch the Live Telecast of Paris Saint-Germain vs Saint-Etienne Coupe de France 2020 Final Football Match in India?

Unfortunately, live telecast of Paris Saint-Germain vs Saint-Etienne (PSG vs St-Etienne) match in Coupe de France 2020 final match will not be available in India as there are no broadcasters available for the French Cup in the country.

There will also be no live streaming option available for the Coupe de France 2020 final match between Paris Saint-Germain and Saint-Etienne. Fans can, however, follow moments from the game on the official twitter account of Coupe de France as well on the twitter pages of both PSG and St-Etienne.

Saint-Etienne will be without defender William Saliba, who has returned to Arsenal having signed for them last summer. Tuchel, however, have a full squad available and have bene sensational in both their club friendlies.

(The above story first appeared on LatestLY on Jul 24, 2020 10:01 PM IST. For more news and updates on politics, world, sports, entertainment and lifestyle, log on to our website latestly.com).