Lionel Messi is set to return from injury and this match against English champions Manchester City could just be the right stage for him to open his goalscoring account for PSG. The game is likely to end in a scored draw which will boost Manchester City’s prospect of topping this group. 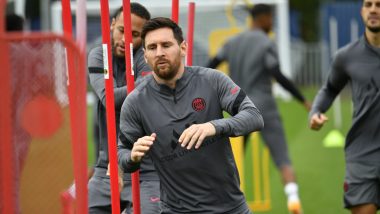 It is a mega clash in the UEFA Champions League as Paris Saint-Germain take on Manchester City in Paris. The two clubs met in the semi-finals stage last season where it was Pep Guardiola’s men who came out on top easily. For several years now despite the enormous financial backing of their owners, these giants have failed to win Europe’s top prize and pressure will be high once again this year. PSG failed to win against possibly the weakest opponent in the group in the form of Club Brugge while Manchester City head into the game on the back of a convincing 6-3 win over RB Leipzig. The game pits some of the biggest names in world football against each other and this has created a lot of buzz amongst the fans. PSG versus Manchester City will be telecasted on the Sony Ten Network and streamed on Sony Liv app from 12:30 AM IST. Pele Hails Lionel Messi for Breaking His Record To Become South America’s Highest International Goalscorer, Wishes Him the Best for His PSG Career (Check Post)

Lionel Messi is back training for PSG and is in line to start against Manchester City. The Argentinian superstar is yet to settle in at his new club but it is in games such as these that his experience can come in handy. He will line up alongside Neymar and Kylian Mbappe in a front three with Ander Herrera and Leandro Paredes joining the attack from midfield. Idrissa Gueye will sit back and provide cover to the back four comprising of Marquinhos and Presnel Kimpembe.

Ilkay Gundogan has been ruled out for Manchester City with an injury which means Bernardo Silva should start in Paris. Rodri and Kevin de Bruyne complete the midfield trio for the visitors and the trio will have a huge role to play in the match. Ferran Torres has settled well in his false nine role where he can get the likes of Jack Grealish and Riyad Mahrez involved in the match.

The game is likely to end in a scored draw which will boost Manchester City’s prospect of topping this group.

PSG vs Manchester City clash in UEFA Champions League 2021-22 will be played at Parc Des Princes in Paris on September 29, 2021 (Wednesday). The game has a scheduled time of 12:30 am IST (Indian Standard Time).

Where To Watch Live Telecast of PSG vs Manchester City, UEFA Champions League 2021-22 Match on TV?

Sony Pictures Network are the official broadcasters of UEFA Champions League 2021-22 in India and will telecast the games live on its channels. Fans can tune into Sony Sports HD/SD channels to watch the live telecast of PSG vs Manchester City on TV.

Sony Pictures Network’s official OTT platform Sony Liv will be streaming the game live for its fans in India. You can tune into the Sony Liv app or website to watch PSG vs Manchester City, UEFA Champions League 2021-22 live streaming online. JioTV would also provide live streaming for this match.

(The above story first appeared on LatestLY on Sep 28, 2021 01:40 PM IST. For more news and updates on politics, world, sports, entertainment and lifestyle, log on to our website latestly.com).