Real Madrid were held to 1-1 draw at home by Real Sociedad. A win would have taken Real three points within leaders Atletico ahead of Sunday’s Madrid derby but the draw have now left them third with 53 points off 25 matches. They are level with second-placed Barcelona and five points adrift of Diego Simeone’s Atletico, who also have a game in hand. 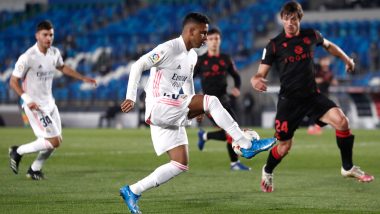 Real Madrid forward Vinicius Junior came off the bench to salvage a point at home against Real Sociedad on March 1 (Monday). His 89th-minute strike helped Madrid snatch a draw and avoid another home defeat but left them further behind in the La Liga title race. Without a number of first-team players, including captain Sergio Ramos and striker Karim Benzema, due to injuries, Zinedine Zidane’s side hit the woodwork twice in the first half but it was the visitors who took the lead in the 55th minute with a towering header from forward Portu. Barcelona Issue Official Statement After Catalan Police Raid Club's Headquarters.

Toni Kroos came close to equalising in the second half with his curling effort just missing the target by a whisker but substitute Vinicius eventually equalised with a deflected effort from inside the area with one minute remaining. A win would have taken Real three points within leaders Atletico ahead of Sunday’s Madrid derby but the draw have now left them third with 53 points from 25 matches. They are level with second-placed Barcelona and five points adrift of Diego Simeone’s Atletico, who also have a game in hand. What is Barcagate Scandal? Know About the Controversy Which Resulted in Arrest of Former Barcelona President Among Others.

Madrid looked the more dangerous side right from the start but were lucky not to concede a penalty when Casemiro tripped Nacho Monreal inside the box. The home side improved as the game progressed. Mariano’s header was glanced over the bar by Sociedad right-back Andoni Gorosabel. In another instance, Marco Asensio hit straight at a defender while Raphael Varane struck the top of the bar. Real could manage only one shot in the first half with Luca Modric testing Sociedad goalkeeper Alex Remiro from distance. Take a look at the Real Madrid vs Real Sociedad match goal video highlights.

Both sides came off the break with more intent and aggression but it was the visitors who found the net first. Real Sociedad striker Portu scored with a thumping header to take the lead. They should have then killed the game but Alexander Isak failed to connect a cross from Portu while Robin Le Normand came close with a header.

Madrid looked like they lacked composure and were devoid of ideas but eventually snatched a point with an ugly goal. Lucas Vazquez’s low cross was turned in by Vinicius with some help of a deflection to get a point for his side.

(The above story first appeared on LatestLY on Mar 02, 2021 08:58 AM IST. For more news and updates on politics, world, sports, entertainment and lifestyle, log on to our website latestly.com).