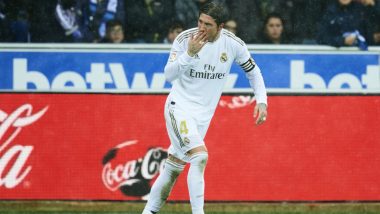 With the title hunt of La Liga 2019-20 title, Real Madrid who is at the top of the table will be hosted by Athletic Real. The Los Blancos have announced the 23-member squad for the upcoming game. The squad witnessed an absence of Eden Hazard, Raphaël Varane and James Rodriguez and the netizens are quite anxious about the three players not being a part of the team. The match will begin at 5.30 PM IST and the team and fans are hoping that the Los Blancos continues their winning streak. ATH vs RM Dream11 Prediction in La Liga 2019–20: Tips to Pick Best Team for Athletic Bilbao vs Real Madrid, La Liga Football Match.

Zinedine Zidane, Real Madrid boss addressed the press before the game and spoke about Hazara'd injury in detail. He said that the team does not want to risk anything. "Hopefully, it's a small thing and we can see him again before the end of the league [season]," he said during the press conference. The 29-year-old has so far featured in only 13 games of the league. No sooner the team announced the squad, the fans started reacting and were anxious about three absentees. Check out the tweets below:

No Varane, I am anxious.

No James, it is unfair.

As of now, Real Madrid stands on number one with 74 points in their kitty. A win here would extend their lead on the points table. Barcelona also is playing tonight at the same time Villareal which would obviously mean that this is quite a vital game for both teams.

(The above story first appeared on LatestLY on Jul 05, 2020 02:36 PM IST. For more news and updates on politics, world, sports, entertainment and lifestyle, log on to our website latestly.com).