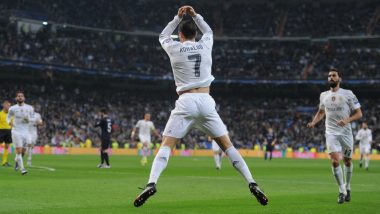 Real Madrid once again faced a shocking defeat against Shakhtar Donetsk in the Champions League 2020. The team had already lost to Shakhtar in the first leg of the tournament and they hoped for a change in fortunes but alas! Things looked the same for the Los Blancos in the second leg of the tournament too. Zinedine Zidane’s side lost to Shakhtar by 0-2 in their own backyard. While many fans were upset with the result and they trolled the team, the others said that the Los Blancos misses the services of Cristiano Ronaldo. Cristiano Ronaldo, Lionel Messi, Robert Lewandowski & Others Nominated for Player of the Century Award, See Full List.

A netizen even came up with a stat that revealed how important was CR7 to Real Madrid. Another netizen said that Real Madrid was not the same without Ronaldo and posted a picture of CR7 on social media. Cristiano Ronaldo left Real Madrid in 2018 and joined Juventus. However, there were rumours of how the former Manchester United star wanted to get back to Real Madrid in the near future. But talking about now, let's have a look at a few tweets by netizens.

Real are shit without Ronaldo, since he left they been knocked out of the round of 16 and now they seemed destined for the Europa League 😥😥they never should've sold Ronaldo

Real Madrid just ain't shit without Cristiano Ronaldo, his goals, his zeal to succeed carried Zidane in Europe while he was there, Ronaldo shouldn't have left

You don’t know what you have

You don’t know what you have until it’s gone pic.twitter.com/Sef4Bkr9c5

Cristiano Ronaldo is more impactful for Real Madrid than anyother Madrid players. We can see their struggle in champions league once he left them.

Real Madrid aren’t the same in Europe without him... pic.twitter.com/ZIJ4PmeBYv

Cristiano Ronaldo and Gareth Bale looking at Real Madrid loosing home and away to Shakhtar Donetsk in the Champions League and knowing they may be heading to Europa League : pic.twitter.com/vJm5z9lGQO

Talking about Real Madrid the team is staring at elimination from the Champions League 2020. Their next match against Monchengladbach would be a do or die game to survive in the UCL 2020-21.

(The above story first appeared on LatestLY on Dec 02, 2020 01:19 PM IST. For more news and updates on politics, world, sports, entertainment and lifestyle, log on to our website latestly.com).