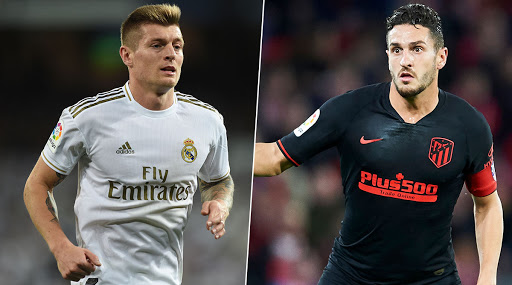 Real Madrid and Atletico Madrid will face each other in the finals of Supercopa de Espana 2019-20 as they look to get their hands on the first trophy of the season. The match will be played at the King Abdullah Sports City Stadium in Jeddah, Saudi Arabia. Both teams were fantastic in their semi-final clashes as Real Madrid got the better of Valencia 3-1 while Atletico came from behind to beat Barcelona 3-2. So ahead of this all-important Madrid Derby in the Spanish Super Cup, we take a look at some of the players who could make a huge impact on the match. FC Barcelona vs Atletico Madrid Result, Goal Video Highlights: Angel Correa Winner Sends Atleti to Supercopa De Espana 2020 Final.

The change in Super Cup's format has benefited both the teams as they now lock horns with each other in the finals and have an opportunity to get their hands on the first trophy of the season. Real Madrid have won this trophy on 10 occasions with their last success coming back in 2017. Los Blancos will enter into this match undefeated since October 19, 2019, and will be looking to get one over their cross-town rivals. Atletico will take confidence from their semi-final performance and will be hopeful of getting an important win. Here are some of the key players from this match. Toni Kroos Amazes the Internet With a Crazy Goal During Valencia vs Real Madrid, Supercopa De Espana 2019-20 (Watch Video).

The German is having a fantastic season and was one of the main performers in the semi-finals against Valencia. The 30-year-old opened the scoring in the 15th minute if the game as he scored directly from a corner. He will look to dominate the game and lead his side to yet another win in a final.

The Spanish international has been a vital part of Atletico Madrid’s success over the years. The 28-year-old opened the scoring against Barcelona and was instrumental in the entire game as he kept Sergio Busquestes and Frenkie de Jong in check for the entire game. Koke will have an important job of stopping Kross and Modric in this match.

Isco was instrumental for Real Madrid in their semi-final clash against Valencia as he scored the second goal of the game. This game could be important for the Spanish international as he has fallen down the pecking order in recent times and he could make his way back into the regular starting XI if he performs well.

The Argentine scored the winner against Barcelona in the semi-final clash as the Madrid side booked their place in the finals of this new Super Cup format. Correa has shown good performances in La Liga this season as he has three goals and five assists to his name. Atletico will very much depend on the 24-year-old to give them the much-needed spark in front of the goal.

The 2018 Ballon d’Or winner is having a brilliant season and will be looking to continue his form against the cross-town rivals. Modric scored in the semi-final against Valencia and is also having a good domestic season as well. He has contributed to seven goals in 14 La Liga matches and will be an important player in deciding the outcome of this clash.