Real Madrid will be without the services of several key players in Marcelo, Eden Hazard, Gareth Bale and Lucas Vazquez. There is some good news though with Rafale Varane back in the squad after missing the last match. Ferland Mendy gets a game in with Marcelo out while goalkeeper Thibaut Courtois returns to the playing eleven. 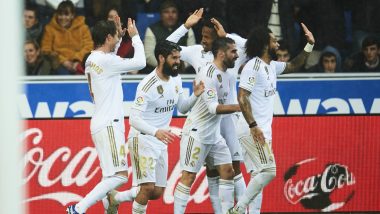 Real Madrid vs Espanyol, La Liga 2019-20 Free Live Streaming Online & Match Time in IST: Real Madrid are playing some fantastic football in the La Liga and a win against Espanyol this evening should lift them to the top of the standing albeit temporarily. The Los Blancos have not lost in their last eight games in all competition and are gaining some serious momentum under Zinedine Zidane. It will be interesting to see how Espanyol puts up a fight against Real Madrid considering they are 19th in the league with 9 points in 15 games. They have not won in their last five La Liga matches and survival looks bleak for them at the moment. Fans searching for live streaming and live telecast of Real Madrid vs Espanyol clash in La Liga can scroll down for more details. Real Madrid Vs Espanyol, Spanish LaLiga 19/20 - Live Football Score.

Real Madrid will be without the services of several key players in Marcelo, Eden Hazard, Gareth Bale and Lucas Vazquez. There is some good news though with Rafale Varane back in the squad after missing the last match. Ferland Mendy gets a game in with Marcelo out while goalkeeper Thibaut Courtois returns to the playing eleven. In midfield, Federico Valverde is making quite a name for himself and should keep out Luka Modric from the starting eleven. Brazilian wonder kid Rodrygo's play in the forward areas has won him a lot of admirers in Spain, and Espanyol will do well to stop him.

Visitors Espanyol have midfielder Victor Sanchez suspended while injuries prevent the likes of Javi Lopez and Matias Vargas to feature. David Lopez, Bernardo Espinosa and Fernando Calero have a massive job ahead of themselves to stop Real Madrid getting on the front foot. Wu Lei and Jonathan Calleri are quite adept at playing on the break but will need their midfielders to spot those early runs. With a five-person midfield, they have the necessary setup for this kind of game.

Real Madrid vs Espanyol encounter in La Liga 2019-20 will be played at the Santiago Bernabéu Stadium. The football match will be played on December 7, 2019 (Saturday) as per Indian Time and is scheduled to start at 05:30 pm IST (Indian Standard Time).

Sadly, La Liga fans in India will not be able to watch the Real Madrid vs Espanyol encounter as there is no official broadcaster available in India for Spanish La Liga 2019-20.

Where to Get Free Live Streaming Online of Real Madrid vs Espanyol, La Liga 2019-20 Football Match?

Fans will be able to stream the Real Madrid vs Espanyol football game on La Liga's Facebook Page as they are the official streaming platform for La Liga in India. Fans can watch the game live on JIO TV and GHD Sports app. You can also follow LatestLY for the live score updates of all La Liga 2019-20 in India. Real Madrid should secure an easy routine win against a side that looks down at the moment.

(The above story first appeared on LatestLY on Dec 07, 2019 12:00 PM IST. For more news and updates on politics, world, sports, entertainment and lifestyle, log on to our website latestly.com).