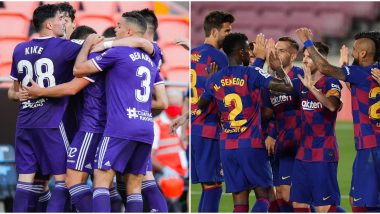 Real Valladolid vs Barcelona, La Liga 2019-20 Live Telecast and Free Live Streaming Online: Spanish La Liga champions Barcelona are just about holding on to their La Liga title ambitions at the moment with Real Madrid 4 points clear at the top and 3 games remaining in the season. It will take a real debacle by the Los Blancos to hand the championship to Barcelona, the chances of which looks remote. Barcelona have a trip to Estadio Jose Zorilla coming up where Real Valladolid stand in their way of a third consecutive league victory. 14th placed Valladolid do not possess much of a challenge for the Catalonians but the job still needs to be done. Real Valladolid vs Barcelona Dream11 Prediction in La Liga 2019–20.

Real Valladolid will be without the services of their star man Hatem Ben Arfa, whom they signed in January. He along with Michel and Mohammed Salisu remain unavailable for selection but the returning Oscar Plano should provide some respite. Sergi Guardiola leads the attack for the hosts in a 4-2-3-1 formation. Fede San Emeterio and Ruben Alcaraz start in a double pivot in midfield with their primary responsibility being the protection of the back four.

Ansu Fati was sent off against Espanyol and is suspended for the tie against Valladolid for Barcelona. He joins Arthur Melo and Samuel Umtiti who are unavailable for selection due to fitness issues. Lionel Messi could be deployed as a playmaker behind the two-man strike force of Antoine Griezmann and Luis Suarez. Sergio Busquets at the base of the midfield makes the team tick with the veteran Spanish midfielder has Ivan Rakitic and youngster Riqui Puig for company.

Real Valladolid vs Barcelona match in La Liga 2019-20 will take place on July 11, 2020 (Saturday). The match will be played at the José Zorrilla Stadium in Valladolid. The game is scheduled to start at 11:00 pm IST (Indian Standard Time).

Where to Get Live Telecast of Real Valladolid vs Barcelona, La Liga 2019-20 Football Match?

Fans cannot live telecast the Real Valladolid vs Barcelona match on their television sets in India and there are no official broadcasters for La Liga in the country. But fans can always follow the live-action online.

How to Get Free Live Streaming of Real Valladolid vs Barcelona, La Liga 2019-20 Football Match?

Fans can follow the live streaming of Real Valladolid vs Barcelona game on the official Facebook page of La Liga, which has been live streaming all the matches for their fans worldwide. Real Valladolid have lost 21 out of their 43 home games against Barcelona and this record could further stretch tonight as the Catalonians come in search of a massive three points.

(The above story first appeared on LatestLY on Jul 11, 2020 03:14 PM IST. For more news and updates on politics, world, sports, entertainment and lifestyle, log on to our website latestly.com).