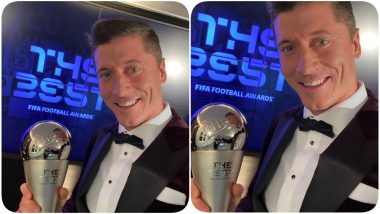 All eyes were on Robert Lewandowski, Cristiano Ronaldo and Lionel Messi as the three were contending for the most prized possession Best FIFA Men's Player 2020. In the end, it was Robert Lewandowski who walked away with the gong. Ronaldo and Messi's fans were surely be disappointed with the same. But team Bayern Munich was celebrating the win of Lewandowski. He has so far scored 45 goals for his club and the country. Manuel Neuer had won the Goalkeeper of the Year Award as he and he even admitted that this was one of his best years and what Bayern Munich achieved as a team was incredible. FIFA Awards 2020: Robert Lewandowski Deserves to Get FIFA Accolade, Says Bayern Munich Coach Hansi Flick.

Liverpool manager Jurgen Klopp won the award for the Coach of the Year. Canadian mid-fielder from Bayern Munich Alphonso Davies and defender Joshua Kimmich has also been named in the World XI. Sergio Ramos from Real Madrid was named the Captain of the Year. Tottenham Hotspurs' Heung Min Son won the Goal of the Year Award for his stunner against Burnley. Here is the video of the goal.

The Best FIFA 2020  would have been a star-studded event where the football stars would walk the red carpet and we would once again have the reunion of Cristiano Ronaldo and Lionel Messi as both of them had been nominated. But this time due to COVID-19, the ceremony was held online where we had the stalwarts attending the event.

(The above story first appeared on LatestLY on Dec 18, 2020 01:36 AM IST. For more news and updates on politics, world, sports, entertainment and lifestyle, log on to our website latestly.com).