Serbia Squad for 2018 FIFA World Cup in Russia: Lineup, Team Details, Road to Qualification & Players to Watch Out for in Football WC

In Austria, Serbia will play two pre-tournament friendlies – against Chile on June 4 and Bolivia five days later. They will play their first match of 2018 FIFA World Cup on June 17 against Croatia. 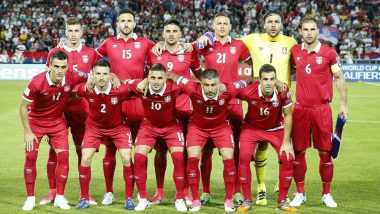 The Serbs are back to playing at a major championship after a gap of 8 years when they last played the World Cup in South Africa, and the squad has some of the big names of European football which makes the progression to the knockouts in Russia a real possibility. Mladen Krstajic was drafted as the coach in October by Serbian FA after firing Slavoljub Muslin, the man who led them to through the qualifiers over a difference of opinion. FIFA World Cup 2018 Schedule in IST for PDF Download: Fixtures, Groups, Time Table with Match Timings & Venue Details of Football WC in Russia.

The goalkeeping position is a toss-up between Vladimir Stojkovic and youngster Predrag Rajkovic and the later may just sneak in to make it to the starting eleven. Centre back Branislav Ivanovic was a serial winner with Chelsea and is the rock at the back for the Serbs. New skipper Aleksandar Kolarov will run down the left flank throughout the game providing his trademark bullet crosses. Antonio Rukavina of Villarreal is also in the fray for a start at the back and is a decent player. 2018 FIFA World Cup Friendlies Fixtures: Check Full Warm-Up Schedule Timetable in Indian Time for Germany, Brazil, Spain, England, Argentina and All 32 Countries.

The central midfield partnership of Nemanja Matic and Sergej Milinkovic-Savic, two of the best in that position in Europe certainly gives Serbia the edge in this particular department. Dusan Tadic is a solid attacking player who plays in England with Southampton and brings a lot of quality on the pitch. Aleksandar Mitrovic is the preferred lone striker in a 4-2-3-1 formation that is modern day football’s most stable formation.

Serbia finished top of Group D of the European World qualifiers with 19 points to be one of the thirty-two teams to make it to the 2018 FIFA World Cup in Russia. They won six out of ten matches they played with Aleksander Mitrovic the top scorer for Serbia in the qualifying phase with six goals.

Serbia finished third in Group B behind Belgium and Croatia and hence was eliminated at the qualifying stage. Their 2-0 loss to Croatia was one of the controversial European ties and drew a lot of media frenzy.

Nemanja Matic: He has been touted as the next captain of English giants Manchester United after some splendid form he displayed in his first season with Red Devils. He covers each and every corner of the pitch for his team, and his left foot is capable of producing great goals.

Sergej Milinkovic-Savic: He has been linked with a host of top European clubs and the man called as ‘The General’ by the Italian media due to his astute game is Serbia’s top player when it comes to raw talent. His ability to break up play and dictate the tempo makes him integral to his club Lazio, and there is no reason why he should not replicate that form for Serbia.

“Success is already achieved, but we will do everything to present Serbia in the best way” in Russia, Serbia coach Mladen Krstajic was quoted saying by state-run RTS television after naming the preliminary 27-man World Cup squad. In Austria, Serbia will play two pre-tournament friendlies – against Chile on June 4 and Bolivia five days later. They will play their first match of 2018 FIFA World Cup on June 17 against Croatia.

(The above story first appeared on LatestLY on May 29, 2018 12:10 AM IST. For more news and updates on politics, world, sports, entertainment and lifestyle, log on to our website latestly.com).