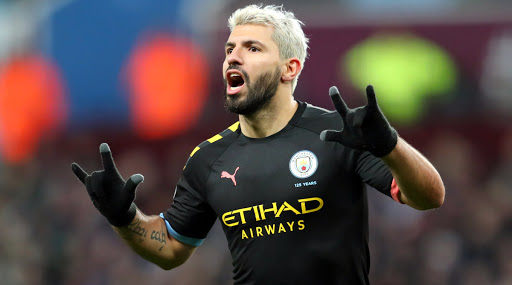 Manchester City striker Sergio Aguero was in a fine form on Sunday as he netted a hat-trick in his sides 6-1 win over Aston Villa in the weekend’s Premier League clash. The Argentine netted his 13th goal of the season in the league and while doing so broke a plethora of records. The 31-year-old rewrote the history books when he scored his second of the game as he went past former Arsenal striker Thierry Henry’s record of most goals scored by an overseas player in the Premier League. The Man City marksman also went past Alan Shearer’s hat-trick record when he scored City’s sixth on the night. Liverpool Boss Jurgen Klopp Reveals Reason for Roberto Firmino’s Apology After 1–0 Win Over Tottenham Hotspur.

It was a good day for Manchester City forward Sergio Aguero as he broke Thierry Henry and Alan Shearer’s records in a 6-1 thumping of Aston Villa. The Argentine broke Henry’s record of 175 goals for Arsenal and also went past Alan Shearer as he netted his 12th hat-trick in England’s top flight. Aguero now on 177 goals, achieved this feat in his 255th game for City while Henry scored 175 goals in 158 matches for the Gunners. The 31-year-old is already Manchester City’s record goal-scorer of all time and is now fifth in the list of all-time leading Premier League scorers. What makes this feat even more extraordinary is that Aguero moved to England in 2011 from Atletico Madrid at the age of 23.

And he did it in 186 fewer games. 🎩 pic.twitter.com/osJeBePsMM

The Argentine forward will now have his eyes set on Wayne Rooney’s record of most goals for a single club as the former England superstar netted 183 times for Manchester United. The league’s goal-scoring record is held by Alan Shearer, who scored 260 times during his spells at Southampton, Newcastle United and Blackburn. Breaking Shearer’s record will be a tough ask for Sergio Aguero as he is nearing his twilight years but the Argentine might just surprise us all.