Tottenham Hotspurs won their first game of the Premier League 2021-22 by sealing a 1-0 win over Manchester City at the Tottenham Hotspur Stadium. Son Heung-min was the one who scored a goal at the 55th minute of the match and helped the team walk away with a win. Before the game, Manchester City was touted to be the favourite to win the fixture. 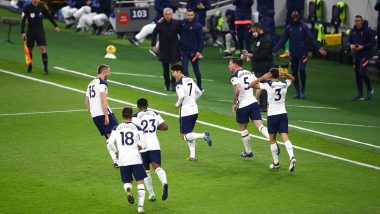 But none of these reasons were enough for Tottenham to lose the match. Son Heung-min was the one who scored a goal for the team at the 55th minute of the match and eventually, the home team walked away with the win. Post this, the players took to social media to express their excitement for the win. The likes of Sergio Reguilon, Dele Alli, Davinson Sanchez and others took to social media and hailed the team for the win.

What a day!! 😍 Felt unbelievable to have the fans back in stadium and even better to get the 3 points! 💪🏽 #COYS pic.twitter.com/Sq2ihyGERk

What an amazing start to the season! #COYS 🤩 pic.twitter.com/pWZ5RlKCGn

Amid Harry Kane's transfer rumours, Son Heung-min was asked if he would want to spend a decade at Tottenham to which said that he does not wish to move anywhere else.

(The above story first appeared on LatestLY on Aug 16, 2021 12:03 PM IST. For more news and updates on politics, world, sports, entertainment and lifestyle, log on to our website latestly.com).