Robert Lewandowski would be aiming to win the award for a second consecutive year after missing out on the Ballon d'Or 2021 title to Lionel Messi, who won it for a record seventh time. The event starts off at 11:30 PM IST (Indian Standard Time). 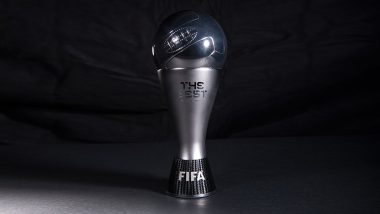 Robert Lewandowski, the winner in the Best men's player category last year, has been nominated for the award this time as well. He would be accompanied by PSG and Argentina star Lionel Messi, who,in 2021, won his record seventh Ballon d'Or title. Liverpool's Mohamed Salah also makes this list. In the women's category, Alexia Putellas, the 2021 Ballon d'Or winner is a favourite to clinch this title but she would face stiff competition from Jennifer Hermoso and Sam Kerr.

The Best FIFA Football Awards 2021 will take place on January 17, 2021 (Monday) in Zurich, Switzerland at 11:30 PM IST (Indian Standard Time). Given the COVID-19 pandemic and subsequent restrictions related to the same, the event would reportedly be held virtually like last year.

Where to Watch Live Telecast of The Best FIFA Football Awards 2021? TV Channels in India

Unfortunately for fans in India, there would not be any live telecast of this event in the country because of the absence of an official broadcaster.

Where to Watch Free Live Streaming of The Best FIFA Football Awards 2021?

Fans eager to watch the live telecast of The Best FIFA Football Awards 2021 will be excited to FIFA would be showing the event live on its official YouTube channel for viewers across the world. Voot Select is also likely to provide live streaming of the event. Also, the social media handles of FIFA would provide live updates about the ceremony and winners.

(The above story first appeared on LatestLY on Jan 17, 2022 10:47 AM IST. For more news and updates on politics, world, sports, entertainment and lifestyle, log on to our website latestly.com).