Tunisia Squad for 2018 FIFA World Cup in Russia: Lineup, Team Details, Road to Qualification & Players to Watch Out for in Football WC

Tunisia has been drawn in Group G alongside England, Belgium and Panama. Tunisia will be playing England on June 18 in their first match of 2018 FIFA World Cup in Russia. 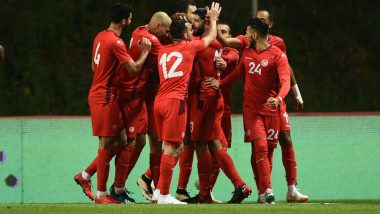 North African country Tunisia has not won a World Cup match since beating Mexico 3-1 in their opening match of the 1978 World Cup and perhaps the squad which will play in Russia may find it tough to make a breakthrough. They last played in the 2006 World Cup in Germany and perhaps the real challenge for this team in 2018 FIFA World Cup would be more to score a goal than to think about winning matches. There is a real possibility of them becoming the weeping boys of the cup unless they reverse the trend a put up an out of the box display. Let us take a look at Tunisia team lineup and squad news in detail. FIFA World Cup 2018 Schedule in IST for PDF Download: Fixtures, Groups, Time Table with Match Timings & Venue Details of Football WC in Russia.

Hamdi Nagguez, Yassine Meriah, Syam Ben Youssef, Ali Maaloul are the men who form the vital defense of this team which is perhaps the only shining attribute of the Tunisian side. The Tunisian played out the qualifiers without conceding a goal and although the chances are grim, will hope a repeat of it in Russia. Talismanic winger Youssef Mskanii is out with a knee injury, and thus Wahbi Khazri is the only playmaker in the side and may have a lot to do without his partner in crime. Ferjani Sassi will be the holding midfielder who can play those long balls but will have to hold well a very scrappy midfield. 2018 FIFA World Cup Friendlies Fixtures: Check Full Warm-Up Schedule Timetable in Indian Time for Germany, Brazil, Spain, England, Argentina and All 32 Countries.

Ahmed Akaichi and Saber Khalifa will both be rotated in the striking position although both of them have a combined tally of just sixteen goals for their country. There is a serious shortage of talent in the striking department, and hence Tunisians are well versed to deal with it.

Tunisia finished top of Group A of the third round of CAF World Cup qualifiers with fourteen points in six games to advance to the World Cup 2018. Youssef Mskani with three goals finished as their top scorer to help Tunisia end their qualifiers with 14 points.

Tunisia having topped Group A of the CAF World Cup qualifiers met Cameroon in the third-round playoff. They were completely outplayed over the two legs and lost 4-1 on aggregate and failed to make the cut for Brazil.

Aymen Mathlouthi: The most experienced Tunisian player and their captain, this six-foot keeper has represented Tunisia in all African Cup of Nations since 2010 and made it to the 2017 CAF team of the year. A favourite of the coach, there is a lot of hope pinned on him.

Wahb Khazri: A dynamic playmaker and probably Tunisia’s finest footballing export playing in the French league and having also had experience in English league, this man will have his task cut out in the absence of potent strikers in the Tunisian squad.

Tunisia has been drawn in Group G alongside England, Belgium and Panama. Tunisia will be playing England on June 18 in their first match of 2018 FIFA World Cup in Russia. Their next two group stage matches are against Belgium on June 23 and Panama on June 28. They played Portugal on May 29 in a friendly game, which they drew 2-2. Tunisia will also be playing against Turkey on June 1 and Spain on June 9 in remaining friendlies.

(The above story first appeared on LatestLY on May 31, 2018 05:21 PM IST. For more news and updates on politics, world, sports, entertainment and lifestyle, log on to our website latestly.com).