The two players were sent monkey-face emojis on Instagram after Manchester City lost the UCL final to Chelsea. Quite recently, Manchester United's Marcus Rashford received "at least 70 racial slurs" after they were defeated by Villarreal in the UEFA Europa League 2020-2021 final on Thursday. 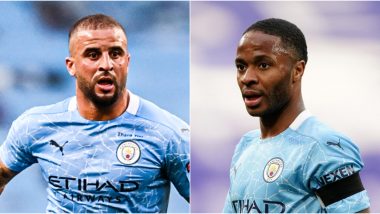 Manchester City players Kyle Walker and Raheem Sterling were at the receiving end of racial abuse after they lost the UEFA Champions League 2020-2021 final to Chelsea on Sunday, according to reports. The two players were sent monkey-face emojis on Instagram after the match. Earlier this month, Sterling had received such messages after City defeated Paris Saint Germain and the boycott on social media for the English football clubs ended. Manchester City 0-1 Chelsea, UEFA Champions League 2020-21 Final: Kai Havertz Goal Wins Blues' First UCL Title Since 2012 (Watch Goal Highlights)

Quite recently, Manchester United's Marcus Rashford received "at least 70 racial slurs" after they were defeated by Villarreal in the UEFA Europa League 2020-2021 final on Thursday. Many other Premier League players like Anthony Martial, Reece James, Trent Alexander Arnold and Sadio have been attacked racially on social media in the past.  Marcus Rashford Reveals Racist Abuses on Social Media After Manchester United Loses UEFA Europa Final 2020-2021 to Villarreal

In a statement on Sunday, a representative of Facebook said, "The racist abuse sent to these players last night is abhorrent and we don't want it on Instagram. We swiftly removed a number of comments and accounts for breaking our rules and we're continuing to review and take action against those that violate our policies. " UCL 2020-21 Final: Chelsea Manager Thomas Tuchel Sets Unique Record And Joins Elite Company After Defeating Manchester City

No single thing will fix this challenge overnight but we're committed to doing what we can to keep our community safe from abuse," the statement further added. Britain has said a new law is being planned which would says that social media firms would be fined up to a turnover 10% of their turnover or 18 million pounds ($25.56 million) if they fail to put an end to online abuse.

(The above story first appeared on LatestLY on May 31, 2021 01:03 PM IST. For more news and updates on politics, world, sports, entertainment and lifestyle, log on to our website latestly.com).