While Ole Gunnar Solksjaer would walk into his first major European final in search of a maiden trophy as United manager, Unai Emery is a Europa league specialist--having won three out of the five finals he has been part of, so far. Both sides boast of some quality players who are capable of changing a game on their own. 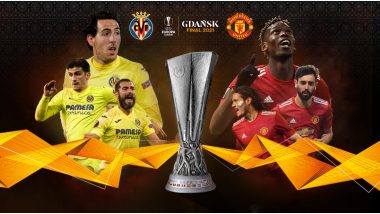 Villarreal is all set to take on Manchester United in the UEFA Europa League final at the PGE Arena in Gdansk in the Europa League final on Thursday in what promises to be cracker of an encounter. While Ole Gunnar Solksjaer would walk into his first major European final in search of a maiden trophy as United manager, Unai Emery is a Europa league specialist--having won three out of the five finals he has been part of, so far. Come Thursday, it would be his sixth final and a chance to add to his Europa league collection. UEFA Europa League 2020-21 Winner Predictions: Who Are the Favourites To Win UEL Trophy?

When it comes to head-to-head, there is nothing really to separate Villarreal and Manchester United. Both have faced each other in European competition four times and it has been a goalless draw on all the occasions. But on Thursday, one would come out on top and the other would miss out. Villarreal vs Manchester United, UEFA Europa League Final Live Streaming Online: Where To Watch UEL 2020–21 Final Match Live Telecast on TV & Free Football Score Updates in India?

Here are some of the key players to watch out for, in the final:

1) Bruno Fernandes: With Harry Maguire likely to miss out of the final due to an injury, Manchester United's stand-in captain Bruno Fernandes, in all likelihood, would step up and lead from the front. The Portuguese midfielder has been in superb form this season, netting 28 goals and 17 assists in 57 appearances for Manchester United. For opposition to dominate and get the better of United, they have to tackle Fernandes and stop him from making an impact. If he clicks, then Solksjaer's chances of a maiden trophy as United manager would receive a huge boost.  Will Harry Maguire Play Tonight In Manchester United vs Villarreal, Europa League 2020-21 Final? Check Possibility Of Defender Featuring In Starting XI

2) Gerard Moreno: One of Villarreal's and Europe's best strikers, Gerard Moreno would have his task cut out if he has to lead Villarreal to the Europa League title. The 29-year old striker has been in sublime form this season, with 23 goals in 33 La Liga appearances. Villarreal would depend a lot on his form and finishing to go past the United defense and find the back of the net.

3) Edinson Cavani: Edinson Cavani arrived to Manchester United from Paris Saint-Germain last summer and in a year, he has already made a big impact on this side. Despite being 34 years of age, the Uruguayan is one of the busiest players on the pitch and so far he has scored 16 goals in 38 matches for United--some of them coming in crucial moments. He would be one very important player to watch out for in the final. Emery would know a thing or two about Cavani, after having coached him at Paris Saint-Germain.

4) Paul Pogba: Paul Pogba is one of those players who had won this same trophy with United back in 2017 when Jose Mourinho was the coach of their side. This time around, the experienced French World Cup winner would want to repeat his performances which would ensure United have a stronghold in the game. He and Fernandes can form a strong force in the midfield and his performance would be key to United's chances of winning the title.

5) Pau Torres: Pau Torres is undoubtedly one of the most underrated centre-backs in Europe currently. He has one of the best players for Emery and his Villarreal side and he has formed a strong partnership with Raul Albiol at the back. The 24-year would be one of the players to watch out for in this game and he would have to be at his absolute best in order to deal with the Manchester United strikers.

(The above story first appeared on LatestLY on May 26, 2021 06:09 PM IST. For more news and updates on politics, world, sports, entertainment and lifestyle, log on to our website latestly.com).