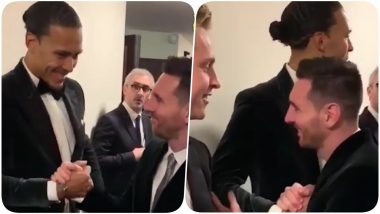 Lionel Messi created ripples by winning his sixth Ballon d’Or of his career in Paris. The gala night was attended by Virgil van Dijk, Alison Becker, Robert Lewandowski and many other football stars. This one particular gesture by van Dijk won hearts of the Barcelona as he was seen shaking hands with the Ballon d’Or 2019 winner Messi. If one may recall, Virgil van Dijk was also nominated for alongside Messi and Juventus star Cristiano Ronaldo. Van Dijk was praised by Barcelona for his sportsmen spirit as he congratulated the Argentine with a smile. Ballon d’Or 2019: Virgil Van Dijk Shares Classy Instagram Post, Hails Lionel Messi and Cristiano Ronaldo As Greatest Footballers (See Post).

Van Dijk was all smiles as he congratulated Messi and the Argentine also responded equally well. The two exchanged handshakes and proceeded for the rest of the evening. The heartwarming video was shared on social media by the official account of Barcelona as they lauded Liverpool footballer for his fair play. Check out the video below:

Virgil van Dijk’s outing at the Ballon d’Or 2019 gala night turned out to be quite a mixed affair for the Liverpool footballer. Van Dijk faced quite a backlash for his statement about Cristiano Ronaldo, who has missed out on the gala night. Ahead of the gala night, he was asked by a reporter about CR7’s absence to which he said, “Was he a rival then?” Post this, he had to clarify that he respected both CR7 and Messi for their greatness and even silenced Piers Morgan who slammed him about the statement.

(The above story first appeared on LatestLY on Dec 04, 2019 12:18 PM IST. For more news and updates on politics, world, sports, entertainment and lifestyle, log on to our website latestly.com).