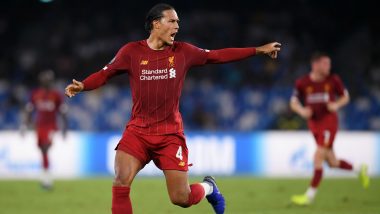 Virgil van Dijk was in the eye of the storm after his crucial error which actually gave a chance to Alexandre Lacazette to score an equaliser during Arsenal vs Liverpool, EPL 2019-20 match. Sadio Mane scored a goal within the first 20 minutes of the game and had a bright start to the game. But exactly 12 minutes later, Virgil gave away the ball to Lacazette which was ultimately converted into a goal by the Arsenal player. The error obviously did not go down well with the netizens and the trolled him brutally on social media. Virgil van Dijk Warns Liverpool Opponents Ahead of Their EPL 2019-20 Restart, Says ‘With Two Wins, We Will Be Champions; but It Doesn’t Stop There’.

The Liverpool player defender took the responsibility for the errors and said that it is how you react to the errors that matter the most. Liverpool, the newly crowned EPL champions ended up losing the game by 1-2. Reiss Nelson was another one who scored a goal at the 44th minute of the match. Now, let’s have a look at the video of the gaffe by Virgil and then the trolls.

Virgil “better than Ramos” Van Dijk with the assist for Lacazete’s goal pic.twitter.com/ZTsAwWMHA4

And the Ppl said he is the best #PremierLeague defender 👏🏾

Best defender for a reason

Best defender for a reason

The most over rated player in premier league history

Mistakes happen. That’s part of football. But it’s how you react to them that matters. Two big games to go, let’s finish strong! Can’t wait for next Wednesday! 🏆🏅 pic.twitter.com/E7kXHwT23x

Liverpool had ended their previous game against Burnley by 1-1. Whereas the match against Arsenal was lost by 1-2. The team still has a couple of games to go before they wrap the season and they would want to end the EPL 2019-20 on a high note.

(The above story first appeared on LatestLY on Jul 16, 2020 04:45 PM IST. For more news and updates on politics, world, sports, entertainment and lifestyle, log on to our website latestly.com).