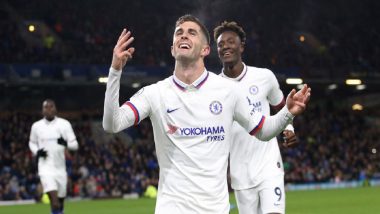 West Bromwich Albion vs Chelsea, Premier League 2020–21 Free Live Streaming Online & Match Time in India: Chelsea have spent heavily in the summer but the results have not reflected the quality they possess in the squad. Liverpool laid bare their defensive issues once again as they romped to an easy win at Stamford Bridge. Frank Lampard has the backing of the board but in a result-driven football world where the owners have little patience, the Blues need a string of positive results. Opponents West Bromwich Albion have lost both their opening games, conceding plenty of goals in the process. It will take a strong performance from them to stem the flow of the tide. West Bromwich Albion versus Chelsea will be telecasted on Star Sports network from 10:00 pm IST. WBA vs CHE Dream11 Prediction in Premier League 2020–21: Tips to Pick Best Team for West Bromwich Albion vs Chelsea Football Match.

Kieran Gibbs received his marching orders against following his foul against James Rodriguez of Everton. Hal Robson-Kanu is a doubt for the game after suffering a muscle problem against Brentford against Carabao Cup. Callum Robinson is most likely to replace Kanu in the forward line with Charlie Austin on the bench. Branislav Ivanovic has been recently added by the hosts in the squad with the Chelsea legend expected to line up against his former club. Chelsea Ready to Challenge Liverpool, Manchester City in Premier League 2020–21 Season, Says Mason Mount.

Hakim Ziyech and Christian Pulisic continue to remain unavailable for Chelsea which is causing problems in the wide area for the Blues. Thiago Silva and Ben Chilwell are expected to make their first start for the visitors and will certainly add quality to their backline. Edouard Mendy has arrived to become the new Chelsea no 1 but Kepa Arrizabalaga should start against West Brom in what should be his last game in the playing eleven before a lengthy spell on the bench.

Bromwich Albion vs Chelsea match in Premier League 2020-21 will take place on September 26, 2020 (Saturday). The match will be played at the Hawthorns and is scheduled to start at 10:00 pm IST (Indian Standard Time).

Where to Get Live Telecast of Bromwich Albion vs Chelsea, Premier League 2020-21 Football Match?

How to Get Free Live Streaming of Bromwich Albion vs Chelsea, Premier League 2020-21 Football Match?

Fans can also catch the WBA vs CHE match live on online platforms. Disney+ Hotstar, OTT of Star Network, will be live streaming the Bromwich Albion vs Chelsea Premier League 2020-21 match online for its fans in India. JIO subscribers can catch the game live on JIO TV while Airtel TV will also be live streaming the game. Chelsea have quality in every department and the more the players gel with each other, the better the results will get. They should secure an easy win against the Baggies.

(The above story first appeared on LatestLY on Sep 26, 2020 05:08 PM IST. For more news and updates on politics, world, sports, entertainment and lifestyle, log on to our website latestly.com).