Chelsea are currently four points behind toppers Manchester City and Tuchel would be eager to have that gap bridged when his side take on Wolves on Sunday. The match would be played at the Molineux Stadium and would start at 7:30 pm IST. 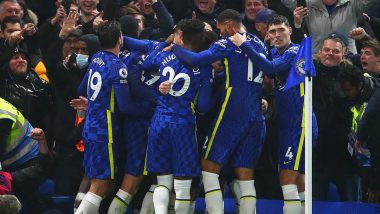 Chelsea would take on Wolves in a Premier League 2021-22 clash at the Molineux Stadium on Sunday, December 19. The match would begin at 7:30 pm. After having held the top position on the Premier League points table, Chelsea were dislodged by Manchester City and now, it is time that they start winning consistently once again so that they can put pressure on the other sides and make this title challenge interesting. Not just that but Thomas Tuchel would be eager to have his defense tighten up and put in a solid performance as they have conceded 11 goals in their last six games across competitions. The German, whose side drew 1-1 against Everton in their last game, would be aware that failure to clinch all three points at Molineux might just spell the beginning of the end for Chelsea's title hopes.  Gabriel Martinelli's Brace Leads Arsenal to a 4-1 Win Over Leeds United in EPL 2021-22 (Watch Match Highlights)

Wolves meanwhile have managed to be within the top ten despite the inconsistency and would indeed provide a tough challenge to Chelsea. They might not have had a good season so far but their win over Brighton in the last match sure does promise of better things to come for Bruno Lage's side. Raul Jimenez is likely to return to the playing XI following suspension.

The Wolves vs Chelsea Premier League 2021-22 match will be played at  Molineux Stadium. The game will be held on December 19, 2021 (Sunday) and is scheduled to begin at 7:30 pm IST (Indian Standard Time).

Where to Get Live Telecast of Wolves vs Chelsea, Premier League 2021-22 Football Match?

How to Get Free Live Streaming of Wolves vs Chelsea, Premier League 2021-22 Football Match?

The game will also be available online for live streaming. As Star Network is the official broadcaster for Premier League in India, fans can watch the live streaming of the Wolves vs Chelsea match on Disney+Hotstar.

(The above story first appeared on LatestLY on Dec 19, 2021 04:24 PM IST. For more news and updates on politics, world, sports, entertainment and lifestyle, log on to our website latestly.com).