An air of uncertainty had been hovering over the 19th edition of the multi-sports Games ever since Shanghai came under a fresh wave of the pandemic, forcing a lockdown in the city. The Olympic Council of Asia (OCA) Executive Board met in Tashkent on Friday to discuss the situation and felt postponing the Games was the best decision under the circumstances. 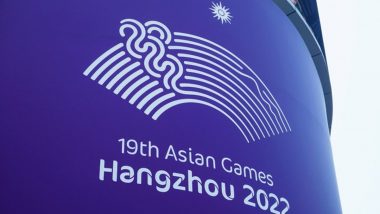 Tashkent/Beijing, May 6: The Hangzhou Asian Games, which were scheduled to take place from September 10 to 25, were on Friday postponed indefinitely amid a recent surge in COVID-19 cases in China, a development that was on expected lines and evoked mixed reactions from Indian athletes. The new dates will be announced in near future.

An air of uncertainty had been hovering over the 19th edition of the multi-sports Games ever since Shanghai came under a fresh wave of the pandemic, forcing a lockdown in the city. The Olympic Council of Asia (OCA) Executive Board met in Tashkent on Friday to discuss the situation and felt postponing the Games was the best decision under the circumstances.

"Following detailed discussions with the Chinese Olympic Committee (COC) and the Hangzhou Asian Games Organising Committee (HAGOC), the OCA Executive Board (EB) today decided to postpone the 19th Asian Games, which were scheduled to be held in Hangzhou, China, from 10 to 25 September 2022," the OCA said in a statement, posted on its website. Asian Games 2022 in Hangzhou Postponed: Chinese State Media.

"The new dates of the 19th Asian Games will be agreed between the OCA, the COC and the HAGOC and announced in the near future," the statement added.

The Indian Olympic Association (IOA) said the postponement of the Games is "certainly a sort of a setback" for some athletes.

"The postponement of any big event or Games is a disappointment for the athletes. They become older by some months or one year whatever is the case when the Games are rescheduled," IOA Secretary General Rajeev Mehta told PTI.

"Many of our athletes had already started training and preparations for the Asian Games, and IOA feels for them. The postponement was on expected lines due to COVID-19 but this was not in our hands."

Indian men's hockey team goalkeeper P R Sreejesh said the delay in the Games is disappointing but it gives them more time to prepare.

The winners of both the men's and women's hockey events will earn direct entry into the 2024 Paris Olympics.

"It's a disappointment but somewhere down the line we were expecting it considering the situation in China. But we want to look at it from a positive point of view because we will get more time to prepare for the Asian Games," Sreejesh told PTI. "We already have the experience of playing in a postponed Games (Tokyo Olympics), so we know what it takes to remain in the shape."

"The positive part is that there are plenty of tournaments lined up for us, like the Asia Cup, Pro League matches in Belgium, Commonwealth Games and World Cup next year. The dates of the postponed Asian Games are yet to be announced so we will get enough time to prepare our best for the Asian Games."

Meanwhile, All India Tennis Association (AITA) said the postponement actually suits them since the Asian Games and Davis Cup tie against Norway won't clash now. "It's good for us. Our players won't be under pressure to play two big events in space of seven days. We can send best teams to both events. We can concentrate on Davis Cup first and then prepare," said AITA Secretary General Anil Dhupar.

India's away Davis Cup tie is scheduled in Norway on September 16-17 or 17-18. Swimmer Sajan Prakash said he will now have to go back to the drawing board and plan for another year. "It affects me in the way that I now have to keep up with another year of competitions, one more extra year.

"For swimmers who planned till the Oympics it's fine but for those who aimed till the Asian Games, it will be a huge task for them to restart again. It's mixed emotions," Prakash said. The OCA said the HAGOC was well prepared to deliver the Games on time despite global challenges. However, after carefully considering the pandemic situation and the magnitude of the Games, the decision was taken by all the stakeholders.

The name and the emblem of the 19th Asian Games will remain unchanged, and the OCA believes that the Games will achieve complete success through the joint efforts of all parties. About 11,000 athletes were to compete in 61 sporting disciplines in the Games.

The development comes at a time when China is battling a record number of daily cases in Shanghai, which is only a short train ride away from Games host city Hangzhou. Hangzhou, the capital of Zhejiang province, is some 175 kilometres southwest of Shanghai. As per the latest update, Zhejiang has recorded 3124 positive cases and one death.

Additionally, the 3rd Asian Youth Games, which was scheduled from December 20-28 in Shantou, China have also been cancelled.

The next Asian Youth Games will therefore be held in 2025 in Tashkent, Uzbekistan.