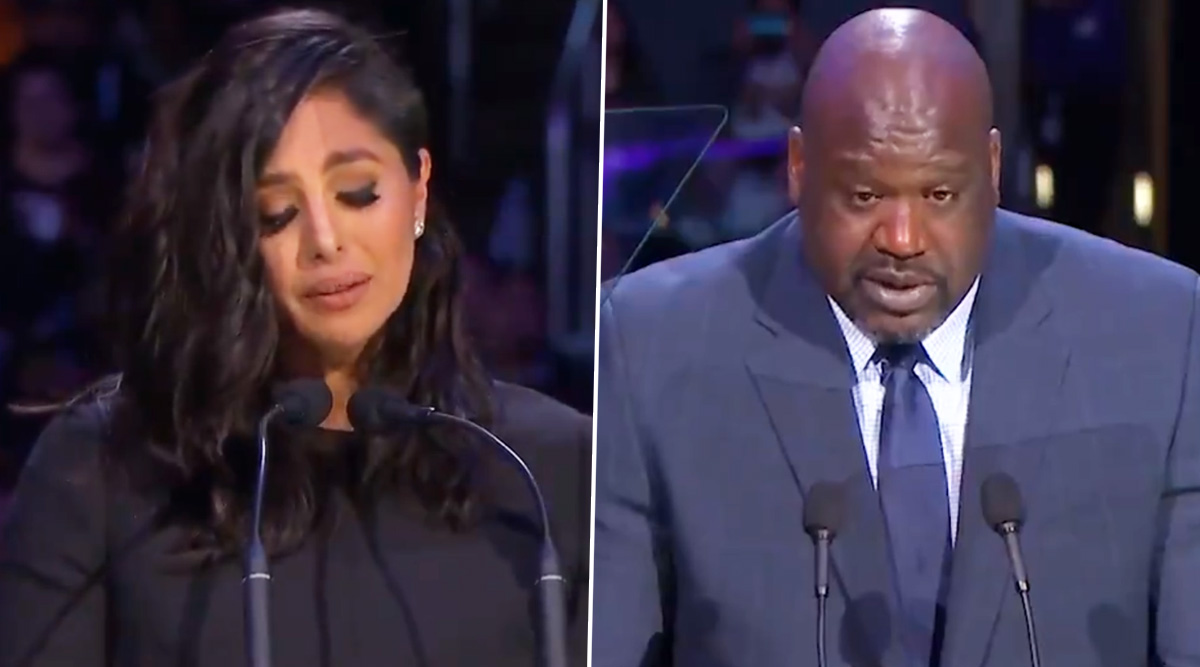 A public memorial service to honour the life of late basketball player Kobe Bryant and daughter Gianna who passed away in helicopter crash was held at the Staples Center on Monday, February 24.  The funeral service, also known as the "A Celebration Of Life Kobe & Gianna Bryant" and saw many NBA legends and celebrities in attendance. Wife Vanessa delivered a very emotional yet powerful speech where she spoke publicly for the first time after the tragedy. Another memorable moment was when Shaquille O'Neal shared an anecdote on Kobe Bryant which got some laughs from the audience. Tearful Michael Jordan Commemorates ‘Little Brother’ Kobe Bryant at Star-Filled Memorial in Los Angeles (Watch Video).

Vanessa Bryant spoke for about 20 minutes honouring and remembering best from the life of Kobe and daughter Gianna (Gigi). She remarked how Gigi would've grown to become the greatest player in women's basketball. Also recalling how the 13-year-old would always give her kisses before every morning and before sleeping. In the first part of her speech, she spoke about their close relationship as mother and daughter.

Coming to Kobe, she spoke how he was the romantic one among them and also a very devoted father. She shared how family still came to him while he also concentrated on his games. She made a very apt and heartbreaking end to her speech saying, "God knew they couldn't be on this earth without each other. He had to bring them home to heaven together. May you both rest in peace and have fun in heaven until we meet again. We love you." Kobe Bryant Death in Helicopter Crash Was Predicted 8 Years Ago! Fan’s 2012 Tweet Foreseeing the Basketball Player’s Untimely Death Goes Viral.

Watch Video of Vanessa Bryant's Speech on Kobe and Gigi:

Kobe's good friend and basketball player Shaquille O’Neal was one of the notable speakers and made the audience laugh with an anecdote. He made an NSFW quote in his speech while recalling their special bond and the three NBA titles that he and Bryant won together. He said, when Shaq pointed out "there's no I in 'team'," Bryant replied, "I know but there’s a ‘M-E’ in that mother*****r".  The audience did have a lighter moment in here.

Kobe: I know but there’s a ‘M-E’ in that mother*****r.@Shaq reminisces on his playing days with Kobe and their special brotherly bond on and off the court. pic.twitter.com/Jtf23vL8R7