Pragati Choudhary, an ISSF Championship gold medallist, had suffered a brain stroke on May 5 and underwent operation the very next day. She was discharged on June 1 and had to undergo physiotherapy followed by light exercised before she could return to the archery range. Her father had to sell off everything to fund her treatment. 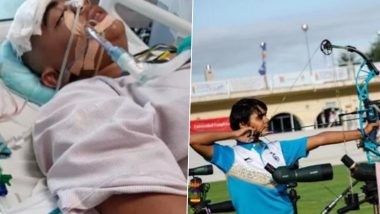 Pragati Choudhary, a 16-year-old Indian archer, has been selected for the Indian women’s compound team after suffering a brain stroke and being in a coma in May last year. Pragati finished third in the national selection trials to book a spot in the team, which will take part in the upcoming Archery World Cup. The national selection trials was held on March 5 (Friday) at SAI Sonepat to pick teams for the next three World Cups and Pragati secured the third position to make the cut. The next Archery World Cup will be in Guatemala in April this year. Shadab Khan & Hasan Ali Blame ‘Evil Eye’ For the Postponement of PSL 2021, Post Tweets on Social Media.

But things looked bleak when Pragati was hospitalised and had to be operated on after suffering a brain stroke last year. It took her two months to start walking again. "I had to go for physiotherapy to start walking again," she told The Tribune. "In two months, the doctors gave me the go-ahead to start training again. It was difficult to start off, but I am happy that today I have won a place in the senior team." MS Dhoni Arrives in Chennai for IPL 2021, CSK Shares Photo; Fans Trend #DhoniDefinitelyYes on Twitter.

Pragati, an ISSF Championship gold medallist, had suffered a brain stroke on May 5 and underwent an operation the very next day. She was discharged on June 1 and had to undergo physiotherapy followed by light exercise before she could return to the archery range. "Initially it was difficult. It took some time to re-adjust myself. My coaches kept encouraging me while my father was always patient," the New Indian Express quoted her saying.

It wasn’t easy for her parents either. Pragati’s father Atul Kumar, who owns a small stationery shop, had to sell off everything to fund his daughter’s treatment. They were also helped by the sports ministry which contributed from the Pandit Deendayal Upadhyay National Welfare Fund for sportspersons. The family also raise money through online fundraising.

Atul was elated as his daughter made the national team. "We always knew she could make it. After a dreadful last year, the new year has brought a lot of joy to our lives,” he told the Express. “She has it in her to go a long way." Pragati will take part in the World Cup Stage I in Guatemala City and Stage III in Paris. "I'm very happy to have made the team. It was a difficult time for everyone involved last year. I'm glad I can now focus on the upcoming challenges," she told the newspaper.

(The above story first appeared on LatestLY on Mar 05, 2021 09:16 AM IST. For more news and updates on politics, world, sports, entertainment and lifestyle, log on to our website latestly.com).