The day was India's best one at the Olympics so far as PV Sindhu added to the country's medal tally with a bronze in women's singles badminton. The Indian men's hockey team also tasted success, defeating Great Britain 3-1 to enter the semifinal. 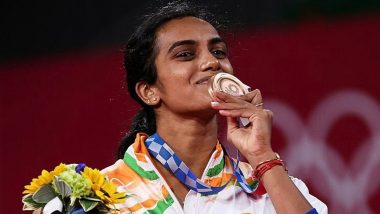 India had perhaps its best day at the Tokyo Olympics with star shuttler and the ever-dependent PV Sindhu winning a bronze medal in women's singles badminton on Sunday, August 1. Sindhu had lost out on a place in the finals on Saturday with a crushing loss to Tai Tzu Ying but she staged a remarkable comeback on Sunday, winning the bronze medal by beating He Bingjiao in straight games and becoming the first Indian woman and third overall from the country to win two Olympic medals in individual sports. The other good news for India came from the men's hockey team, which defeated Great Britain 3-1 to enter the Olympics semifinals for the first time in 49 years. Also, despite boxer Satish Kumar losing his quarter-final match to Bakhodir Jalolov, the entire country is proud of his achievement because he chose to compete in the match despite having multiple stitches on his forehead and chin. PV Sindhu Becomes First Indian Woman To Win Two Olympic Medals: Here’s A List of Athletes Who Achieved This Feat in Individual Sports for India in Summer Games

There's more action awaiting on Day 10 of the Tokyo Olympics with athletes like Dutee Chand and Kamalpreet Kaur in action. Kaur, competing in the finals, would aim to fetch India her first medal in athletics in a long time. The Indian women's hockey team would also be in action, going up against Australia in their quarterfinal match.

Sony Network holds the official rights for the Tokyo Olympics 2020. The matches will be broadcast on Sony TEN 1 HD/SD, Sony TEN 2 HD/SD  and even Sony SIX SD/HD will live broadcast with English commentary while Hindi commentary will be available on Sony TEN 3 HD/SD. SonyLiv will be the app that will bring you the live streaming of the games.

(The above story first appeared on LatestLY on Aug 01, 2021 09:36 PM IST. For more news and updates on politics, world, sports, entertainment and lifestyle, log on to our website latestly.com).