There have been such Indian athletes who have shown that they aren't a one-time hit but are consistent performers at the biggest stage in probably the largest sporting event in the world. PV Sindhu recently became the third Indian to win two Olympic medals in individual sports and check this list out to find out who the others are. 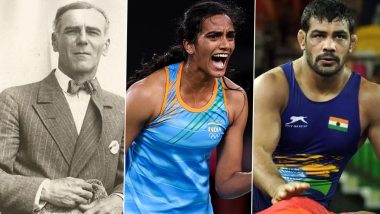 Medals have traditionally been hard to come by for India at the Olympics according to facts and figures in history and in such a scenario, it is difficult to imagine Indian athletes winning not one, but two Olympic medals, that too in individual sports. Yes, there have been such Indian athletes who have shown that they aren't a one-time hit but are consistent performers at the biggest stage in probably the largest sporting event in the world. Apart from consistency, their repeated success at the Olympics makes them stand apart and be recognized as some of the worlds' best at what they do. In this article, we shall take a look at the list of Indian athletes who have won two or more medals while competing in individual sports at the Olympics. India at the Olympic Games Part 1, 1900 Paris: Norman Pritchard, India's First-Ever Olympian

PV Sindhu is the latest addition to this list. The tall shuttler from Andhra Pradesh has always been a consistent performer for India in every major competition that she participates in and the situation is no different when it comes to the Olympics. On Sunday, August 1, she bagged the bronze medal in women's singles badminton by defeating China's He Bingjiao in straight games. Here's a list of Indian athletes excelling more than once at the Olympics. PV Sindhu Wins Bronze in Women’s Singles Badminton at Tokyo Olympics 2020, Becomes First Indian Woman To Win Two Olympic Medals

1) Norman Pritchard (two silver medals in the 1900 Paris Olympics): The first name on this list is what many wouldn't expect. Norman Pritchard wasn't exactly an Indian but he was the first-ever representative of the country in the Olympics. He was of British descent but was born in Kolkata. In the Paris Games 1900, the track and field athlete competed in a total of five events-60m, 100m, 200m, 110m hurdles and 200m hurdles races. Out of these five, he ended up winning silver medals in two events---the 200m race and 200m hurdles race. This was unfortunately India's last medal wins at the Olympics in track and field to date.

2) Sushil Kumar (bronze medal in 2008 Beijing Olympics and silver medal in 2012 London Olympics):  Sushil Kumar was one of India's best wrestlers in the last decade. He made his debut in the 2004 Athens Olympics but failed to win anything. But he kept working hard, winning bronze medals at the Asian Championships and Asian Games and entered the Beijing Olympics in 2008 as one of India's medal hopefuls. He didn't disappoint either. The Najafgarh born wrestler won the bronze medal in the men's freestyle 66kg event--India's first in wrestling at the Olympics in 56 years. He once again helped himself to a podium finish by securing the silver medal in the same event, this time at the London Olympics in 2012. This made him the first athlete of Indian descent to win two Olympic medals in individual sports.

3) PV Sindhu (silver medal in 2016 Rio Olympics and bronze medal in 2020 Tokyo Olympics): PV Sindhu has been one of India's most consistent performers at the Olympics. The shuttler was the star alongside wrestler Sakshi Malik at the Rio Olympics in 2016 where India could only win two medals. Sindhu had settled for a silver after losing to Spain's Carolina Marin in the finals of the women's singles badminton competition. But she wasn't done. The reigning World Champion had been in great form all throughout her Tokyo Olympics 2020 campaign and was tipped to win a medal for India in the women's singles event once again. She didn't disappoint either. Having lost her semi-final match against Tai Tzu Ying, millions of fans Indians were heartbroken. But they knew that she was going to come back even stronger. And so she did. Sindhu went on a rampage in her bronze medal match at the Tokyo Olympics 2020 against China's He Bingjiao and defeated her in straight games, thereby securing another podium finish on Sunday, August 1.  This made her the third Indian and first Indian woman to win two Olympic medals in individual sports.

Sindhu also won India her second medal in the ongoing Tokyo Olympics after Mirabai Chanu had earlier won a silver in weightlifting. All said and done, here's hoping that Sindhu continues with her form in the years to come and more Indians end up joining this list!

(The above story first appeared on LatestLY on Aug 01, 2021 07:16 PM IST. For more news and updates on politics, world, sports, entertainment and lifestyle, log on to our website latestly.com).