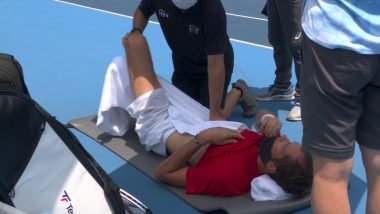 Daniil Medvedev had quite a tough outing while battling against Fabio Fognini at the Tokyo Olympics 2020. He was struggling with extreme heat and humidity while playing against Fabio Fognini. When the chair umpire asked him if he could finish the match, the tennis ace said, "I can finish the match but I can die," Medvedev replied. "If I die, are you going to be responsible?" The tennis stalwart further said that he felt darkness in his eyes. However, succeeded in this match by winning the game 6-2, 3-6, 6-2. Sumit Nagal Knocked Out of Tennis Men’s Singles Event at Tokyo Olympic Games 2020 After Losing Second Round Match to Daniil Medvedev.

He obviously sailed through the next round. This is not the first instance where the players have complained about heat and humidity. In fact, Spanish player Paula Badosa left the game in a wheelchair as she suffered from heatstroke. She was playing against Marketa Vondrousova. Paula also has to withdraw from the mixed doubles game. The video of Daniil Madvdev went viral on social media.

a very metal moment in the Olympic tennis just now as Medvedev casually asks what happens if he dies on the court pic.twitter.com/kotZxePtEw

In fact, not very long ago, Novak Djokovic had also asked for a change in schedule after winning the first round. The temperatures back then were around 91F. “I’m still waiting to meet the player that likes this kind of weather. Playing in extreme heat and humidity that is 90 per cent or God knows how much, it’s very challenging," he said. The tennis matches at the Tokyo Olympics are played in the afternoon at 3.00 pm.

(The above story first appeared on LatestLY on Jul 28, 2021 03:45 PM IST. For more news and updates on politics, world, sports, entertainment and lifestyle, log on to our website latestly.com).