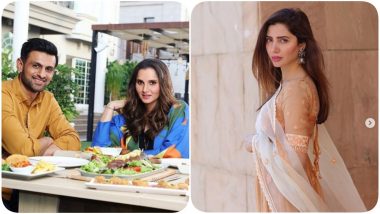 Shoaib Malik has been conducting live chats amid lockdown and this time it was none other than Mahira Khan and cricketer attempted to flirt with the ‘Raees’ actress. Indian tennis ace Sania Mirza who was watching the live video had an epic reaction to it. So here's what happened. The actress during the conversation mentioned that she was finding it difficult to connect the live Instagram session and she was getting old. The Pakistani cricketer passed a compliment and said that it was he who was getting older and not her. Shoaib Malik Allowed to Stay With Wife Sania Mirza and Son Izhaan Before Travelling to England for T20I Series.

Mahira reacted to the compliment by saying, "Is bhabhi watching the video?" The Pakistani cricketer hilariously responded by saying, Sania is not my bhabhi to which the actress said, "I did not mean your sister-in-law but she [Sania] is the sister-in-law of the whole of Pakistan." The Indian sensation went on to write, “Yes I see, what are you two talking about." You can check out the video below:

With the coronavirus pandemic situation all over the world, the sporting schedules have gone for a toss and a lockdown has been imposed. The cricketers are confined to the four walls of the house to break the chain of the virus. The last time, Shoaib Malik conducted a live session, newly crowned Babar Azam was the guest. Sania joined that session as well and hilariously threatened to kill Babar Azam as he selected Syeda Khusbaht as his favourite bhabhi. Sania Mirza and Shoaib Malik tied the knot in 2010 and are blessed with a son named Izhaan.

(The above story first appeared on LatestLY on Jun 30, 2020 03:27 PM IST. For more news and updates on politics, world, sports, entertainment and lifestyle, log on to our website latestly.com).