The Undertaker Announces Retirement From WWE, Says ‘Nothing Left for Me to Conquer’ 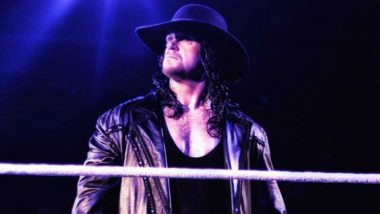 New Delhi, June 22: Wrestling legend The Undertaker has announced his retirement from WWE after a career spanning three decades. The news was revealed to the fans during the last episode of the legendary wrestler's docuseries 'Undertaker: The Final Ride'. In the final chapter of the series, Undertaker revealed that he is at peace with not getting in the ring again.

"Never say never, but at this point in my life and in my career, I have no desire to get back in the ring. I'm at a point, it's time this cowboy really rides away," The Undertaker, whose real name is Mark Calaway, said during the fifth and final episode of the docuseries. The Undertaker Announces Retirement From WWE, Says ‘There’s Nothing Left for Me to Conquer or Accomplish’.

You can never appreciate how long the road was until you’ve driven to the end. #TheLastRide @WWENetwork pic.twitter.com/JW3roilt9a

The Undertaker's last match in WWE was at WrestleMania 36 when he and AJ Styles fought in a Boneyard match in April in which The Deadman had emerged victorious. He was first introduced in the 1990's Survivor Series when he debuted as the final member of Ted DiBiase's "Million Dollar Team." He holds an enviable record of 25-2 at the Wrestlemania.

(The above story first appeared on LatestLY on Jun 22, 2020 12:01 PM IST. For more news and updates on politics, world, sports, entertainment and lifestyle, log on to our website latestly.com).